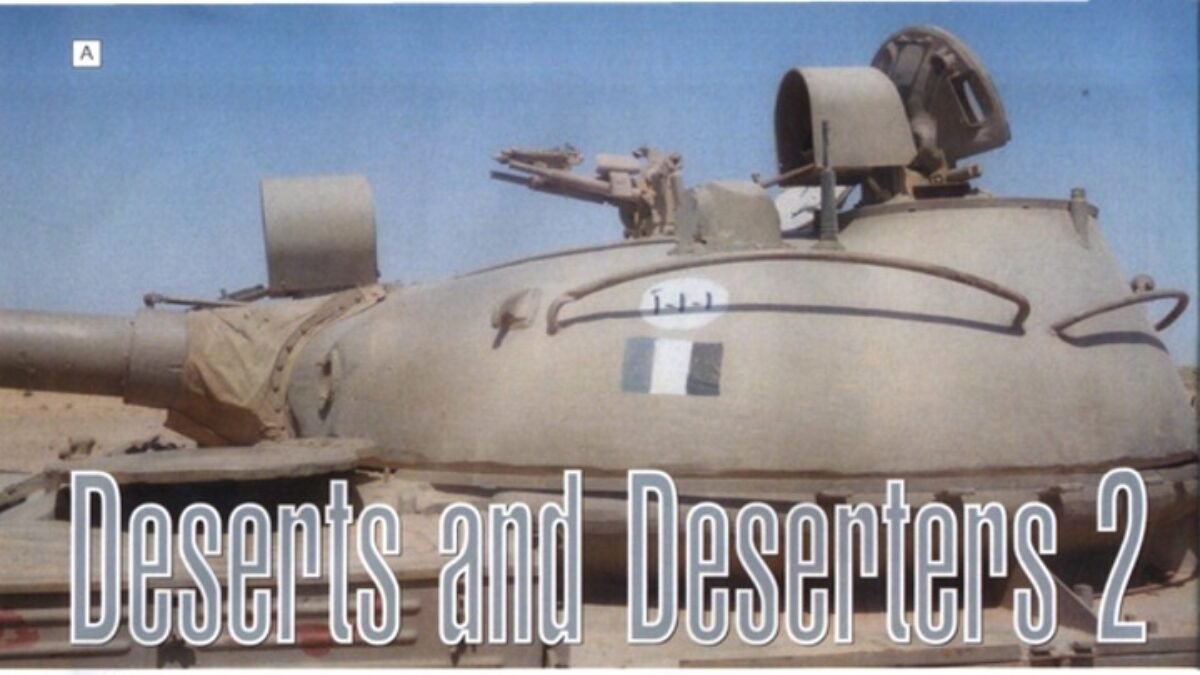 In the period between the expulsion of the Iraqi forces from Kuwait and the Iraq war of 2003, the vehicle marking system detailed in Part One of this article seems to have been largely abandoned, with the exception of the registration plate scheme, which was unchanged, and about the use of callsigns, the application of which was far from universal.

The Divisional/Brigade/Unit markings were mostly missing from armoured vehi­cles, the T-62 in photo A was a rare excep­tion. One thing that did stand out was the amount of vehicles that had tow hooks and occasionally mudguards painted in red or dark red – probably relics from a past parade. The ZSU 23-4 in photos B to D als0 has lots of other hull details picked out in red, but apart from the registration plate numerals painted directly onto the mudguards, no other markings are evident. 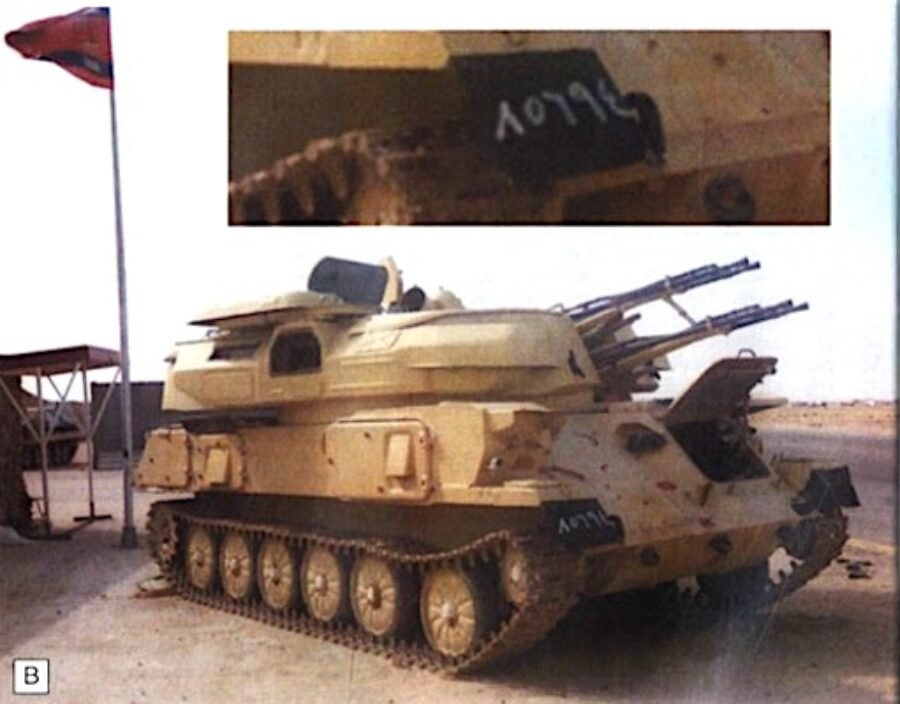 Camouflage patterns were interesting, in that there was a lot more variety to be found than just a plain sand scheme. The Iraqi sand colour used varied, but quite often the shade had a grey tint to it. On closer inspec­tion, I think that the reason for this wasn’t necessarily deliberate, but was caused by skimping on the amount of paint used!

Almost all armoured ,·chicles had been delivered in the standard Russian ‘green’, and the Iraqis then applied one thin coat of sand colour overall. It is the green under­neath showing through that gives the grey shade to the paint. (E). Other shades of sand were seen, including one not a million miles away from British Light Stone (C), a brown­ish tone (F), and one with a hint of pink (G). A few vehicles had been left in the delivery Soviet ‘green’ or even plain grey, but this was quite rare.

It should be noted that Iraq is not all desert. There is a lot of scrub in the south near the Kuwait border, the banks of rivers arc full of palm trees and the area around Baghdad – certainly the southern area – is actually quite green and lush. Two main pattern;, of camouflage painting were evident. The first was green stripe roughly applied over the sand – this was not the Russian ‘green’ left showing, but rather a thin over-wash of patchy gwen (H – approxi­mately Tamiya Deep Green XF26).

The sec­ond was a more complicated system of a pinkish sand and two shades of green. One was quite bright, maybe Tamiya Flat Green X 5 and the other darker and greyer; similar to Tamiya J.A. green, Xl 13. (G).Camouflage tended not to be  applied to tanks, which were mostly plain sand, but light armour and trucks could be quite garish, as the Type 531 ambulance demonstrates. 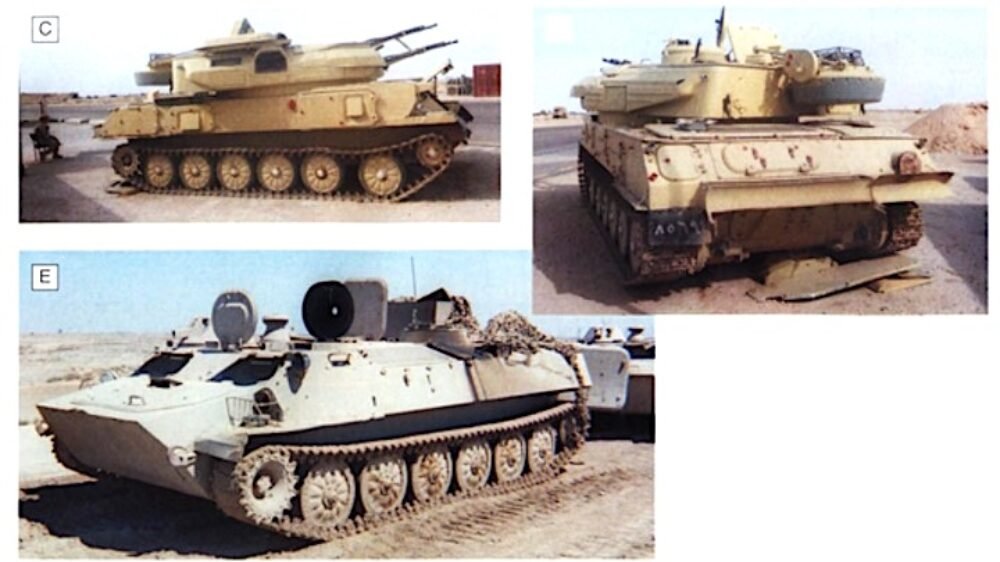 Interiors were gen­erally a very dirty white. Hatch interiors were seen that were also white (J), but dark green was often noticed – engine bays of AFVs were also this colour (K). For fans of extreme weathering on their models, Iraqi vehicles present a perfect opportunity to really go to town! Vehicles were, in the main, cosmetically uncared for – peeling paint, scratches, chips and heavy rusting – all were extremely common. (F, L and M). Mudguards were dented, bent or missing exhaust staining on the tanks was severe, especially on those that had bazooka plates – it would be hard to overdo this! External stowage was something I never saw, not even tow ropes! 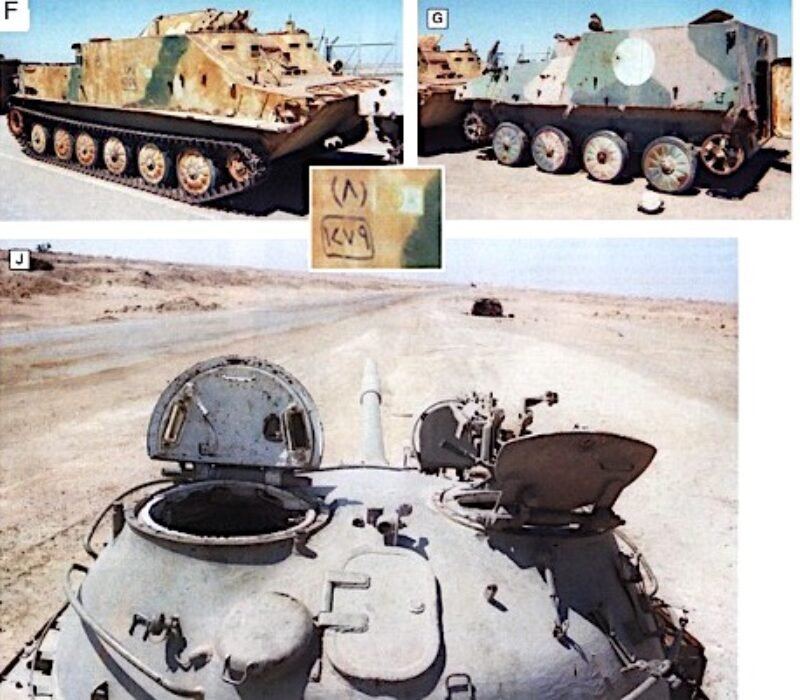 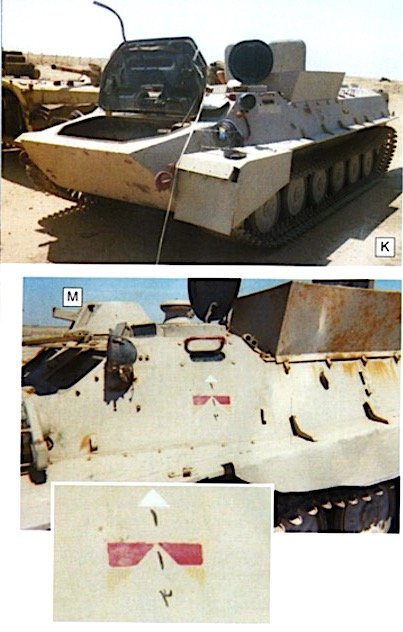 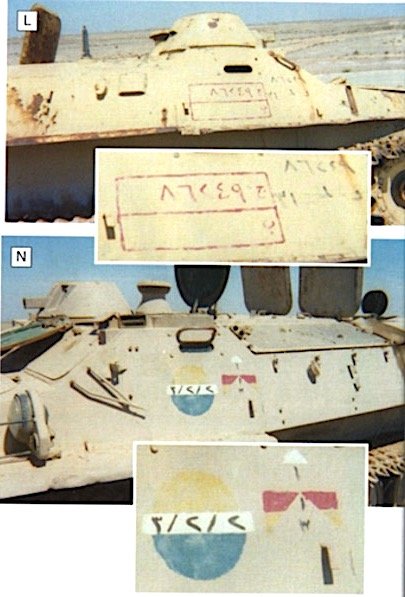 This could be explained by the desertion of the crews, tak­ing their personal kit with them, but I don’t thin!,.. so for two reasons. First, the knocked out vehicles. I saw that hadn’t been aban­doned by the crews were, nevertheless, devoid of stowage, and secondly, deserting crews dumped all their military kit, even down to their boots.

The possession of a pair of boots would be a real give-away as a deserter, so they went barefoot or used ‘flip­flops’ and abandoned vehicles often had four pairs of old boots lying around them! Therefore, I believe that the Iraqis simply didn’t often put external stowage on their vehicles. (Wait for the flood of letters and photos to prove me wrong!) AA machine guns (DShK, etc.,) were common on most tanks (al least until they were looted by pass­ing tankies!) and were often in very poor condition, rusty and unloved.

Finally, trucks and softskins were the exception in the display of unit signs. These were crudely painted onto almost all cab doors, but do not appear to follow the system used in 1990-91, (see Part One), so a new sys­tem appears to have been created. Examples are shown in photos: A, M, and 0. I have been unable so far to decipher the system used -if there was one!

The variation in the types of trucks that the Iraqis used was stag­gering -standardization was not in their dic­tionary. Russian ZILs and URALs, British Land Rovers, Bedford RLs and MKs, German Mercedes UNIMOGs, French Panhards and a hundred others were all seen. 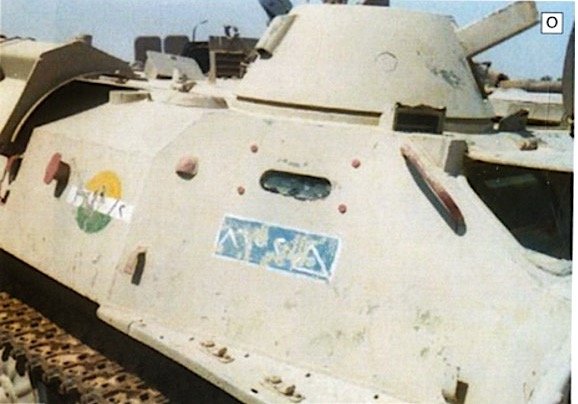 My thanks go to Tim Neate who helped me massively with research material for this article. 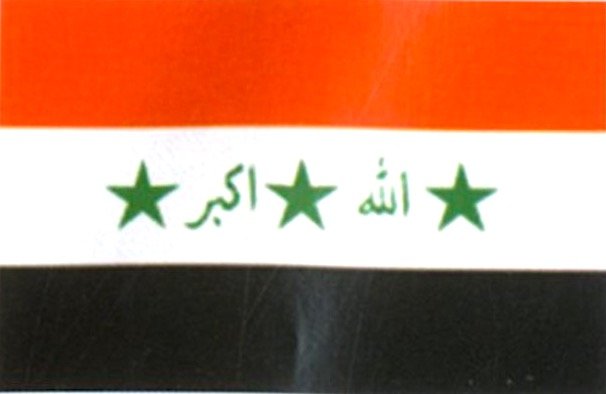