When what you see is NOT what you get!

So, how do you hide large armoured vehicles and towed artillery on flat terrain and in such a way that your enemy believes that not only are they not there but are, infact, somewhere else …… and wants to believe it?

There are no bushes to speak of, and no large land features that are of any use for concealment and with the added feature of strong contrasts between light and shade. To these difficulties should be added your enemies ability for observing your activities by air and you have a conundrum of monumental proportions, and something that would require the mixed skills of the most daring illusionist, devious poker player, air superiority and not a little amount of luck to solve. 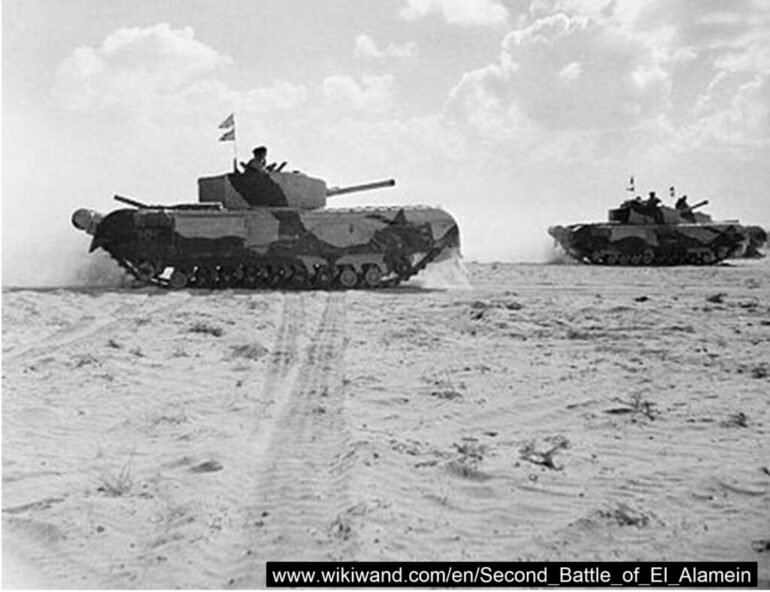 In brief, the 8th army wanted to create the belief in the axis forces that they were going to mount an attack in the south, closest to the Qattara Depression – the area of soft desert, impassable for any but the lightest of vehicles – while actually planning the attack in the north end of the allied line.

The trick was to allow the Axis to see enough activity in the north to believe that this was a feint and that indeed the south was the point to watch. This required enough of a clumsy bluff in the north which should ‘prove’ to be too obvious a draw from activity in the south while at the same time exercising the ‘greatest care’ not be observed while allowing just enough observation to make the south interesting.

It is said that General Wavell came up with the basic idea in the form of a basic sketch of an AFV covered by a canopy, in a memo outlining his requirements in April 1941.

“Is it a wild idea that a tank could be camouflaged to look like a lorry from air by light canvas screen over the top It would be useful during approach march, etc. Please have it considered.”

In effect Wavell wanted newly arrived tanks to be in place in time for his operation Battleaxe, un-noticed by Luftwaffe reconnaissance, who would report only the movement of trucks. Intern Rommel would believe these self-same reports and not deploy his armour until it was too late.

By the end of that month – a matter of seven days – the Camouflage Experimental Section under the command of Major Barkas, had prepared both a sketch and design and from that the Mechanical Experimental Establishment, had a working and tested mock-up of wood and canvas. This successful test led to an order of 400 sunshields 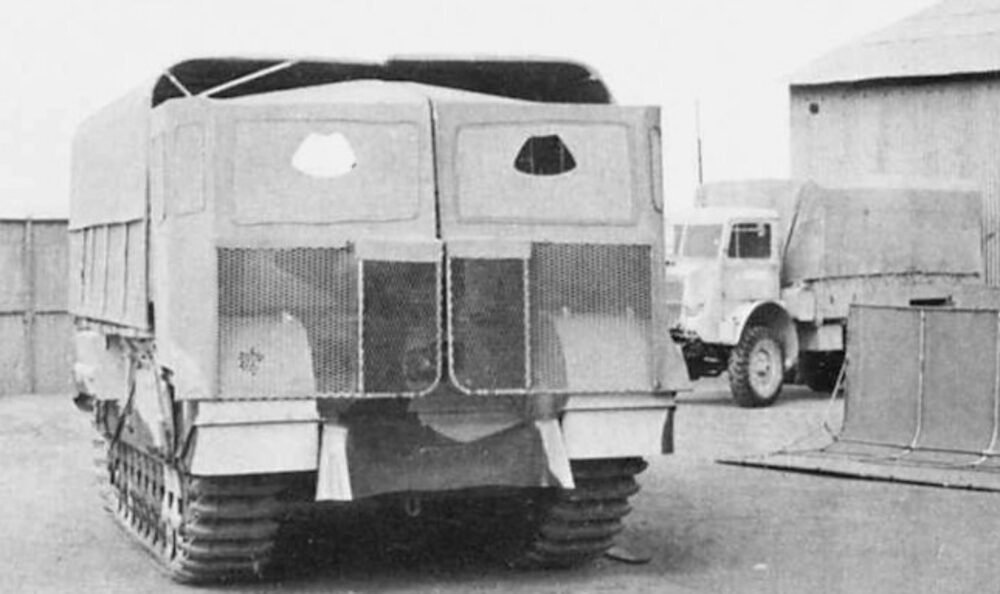 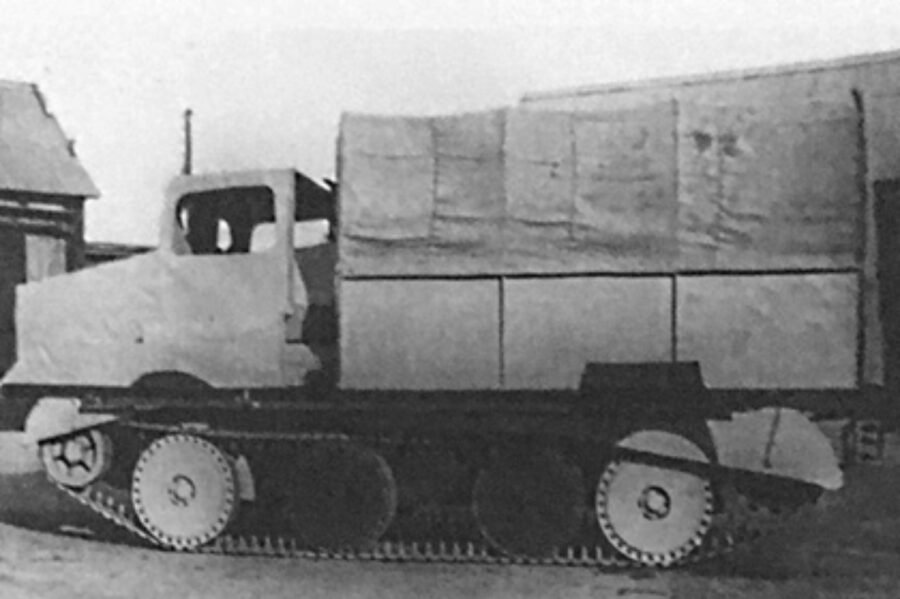 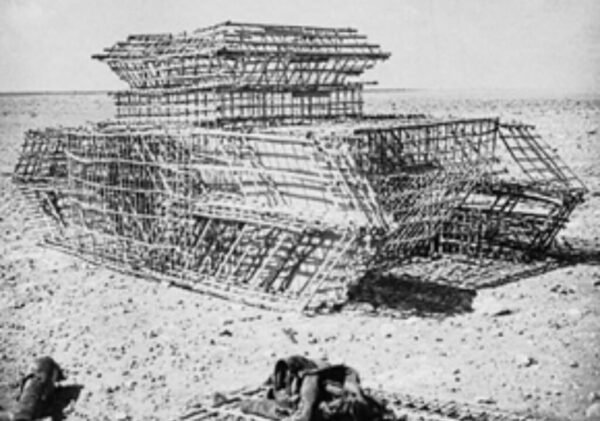 The First prototype was placed on to a crusader and was a heavy wooden affair, but fell apart on its first trial. A second shield was trialled. Its was constructed from a tubular steel from and canvas. This proved to be a great success and was strong, durable and due to the simplicity of construction quicker and cheaper to make.

Just over 700 Sunshields were constructed and placed in a tank park, next to the El Imayid railway station. The crews of the tanks were taught how to erect and dismantle their individual tanks Sunshield.

The disguise was not fool proof in that the tracks were visible at ground level when viewed from the side. When viewed at height, the distinctive marks left by the tracks could be viewed. The front view was however quite convincing. The only insurmountable issue was that tanks and trucks are driven and move in completely different ways, so that a moving column of vehicles would very soon give up their true nature and type to prolonged and close inspection. 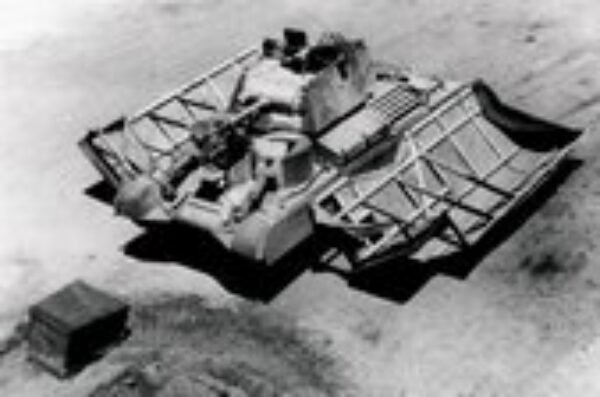 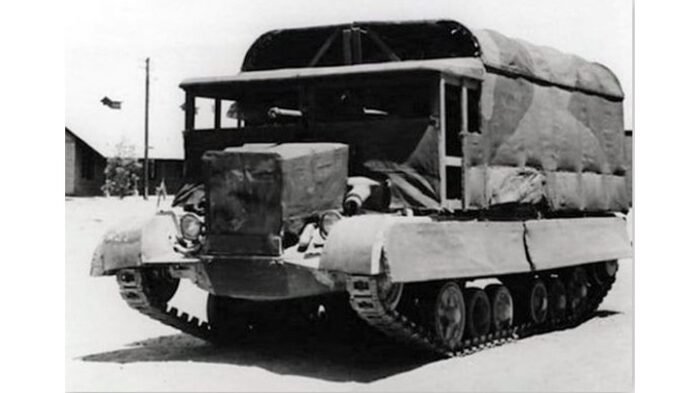 The 7th Armoured division in the western desert were the first to receive sunshields and it is possible that Sunshields were employed deployed in ill-fated operation Battleaxe of June 15th 1941, in which 91 British tanks fell to Rommel’s 88mm guns, with minimal losses to the Afrika Korps. This defeat cost Wavell his job.

With the assumption of overall command of the Eighth Army falling to General Bernard Law Montgomery, Major Barkas’  ‘camofleurs’ at the Camouflage Experimental Section, had to prepare for Operation Sentinel: a way to interrupt Rommel’s plans long enough to allow the arrival of the 51st Highland Division and the accompanying Sherman tanks.

Montgomery was a supporter of the Sunshield and its application in the desert campaign and saw to it that all the requirements for developing a mass deception were made available. The previous two years had seen the refinement of the methods of deception used in the desert and so a striking and daring deception element was developed by Camouflage Experimental Section, to support the Montgomery’s ambitious plan to take the initiative from Rommel.

Montgomery’s requirements were simple to outline and the required outcome was equally simple, but a lot of moving parts were to be found behind the scenes. His need was for two imaginary motorised divisions to appear on the very flat featureless land north of Cairo. Each day the imaginary camps would expand as increasing numbers of imaginary troop and weapons would arrive. These ‘’forces’’ then moved forward to El Alamein. The following battle at Alam Halfa was won in part by deception.

Montgomery’s meeting at his Bug-el-Arab forward HQ, was used to outline his plan to convince Rommel that he intended to attack in force from the South end of his El Alamein line. While everyone would be expecting a northern thrust.

The idea was to cause Rommel sufficient doubt that he would hold back his reserve forces and await confirmation of that northern thrust. What was required was a build-up of soft skinned supply vehicles gathering at the northern end of the line, while at the same time a corresponding gathering of armoured vehicles would start collecting in the South. 2000 dummy supply vehicles were placed at various crucial points

By the judicious use of empty sun shields being placed in one spot and real tanks under Sunshields in another spot and then, swapping the tank from its rear position to the forward position under the once empty Sunshield, allowed for a build up of tanks while the enemy believed that the vehicles were only transports.

Many attempts were made to provide a reliable method to erase the tell-tale marks left by tanks passing across the desert floor. The problem never really went away even with the advent of weighted track erasers developed by the Mechanical Experimental Establishment. 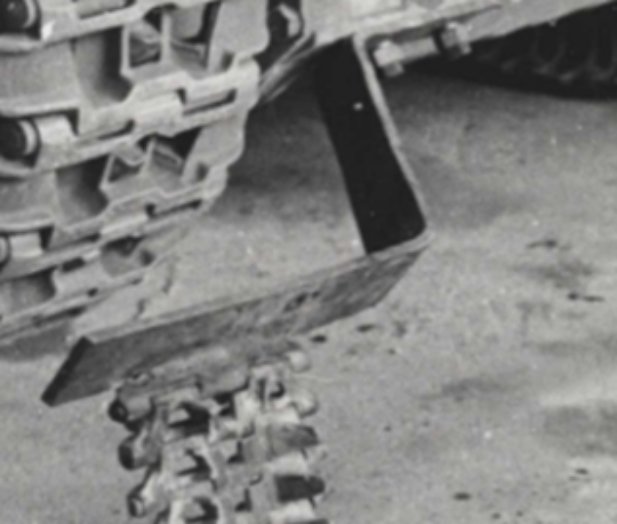 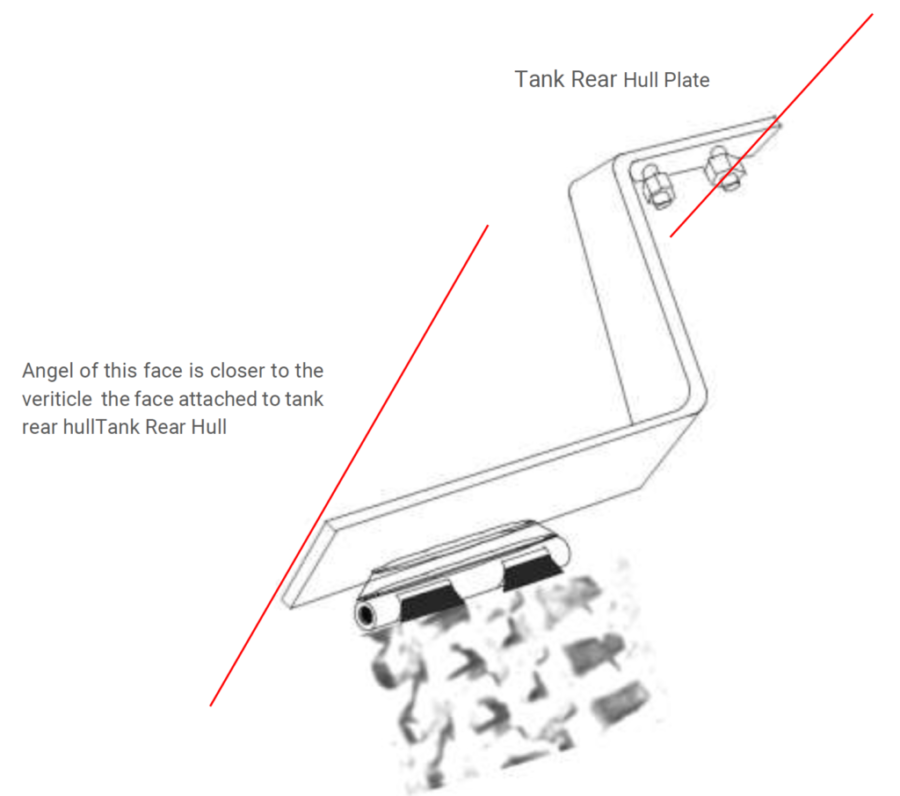 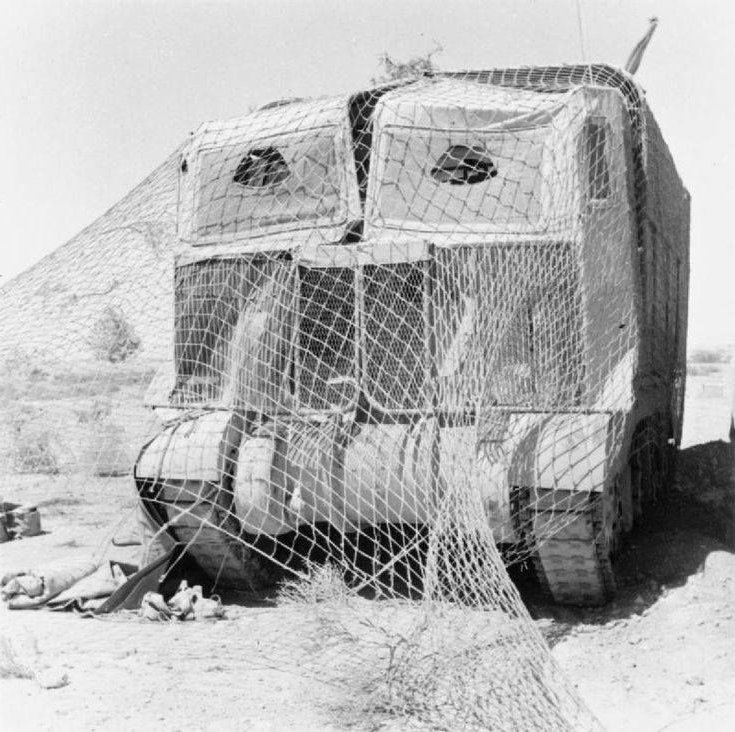 It was not enough that vehicles collect in some sort of tank-park but the every such maneuver requires the support and supply logistics that goes with it and this was not forgotten.  A ‘pipeline’ was laid in a southerly direction with the apparent aim of ‘supplying’ the build-up in the south. The actual pipeline was a line of flattened 34 gallon fuel drums laid next to a dig trench stretching for five miles in a line. The trench was then filled in over night. This line was then moved at night ‘advancing’ like a caterpillar across the desert floor. The addition of fake pump houses and filling points added to the illusion. The installations we guarded by Britain’s best trained straw dummies to provide the expected cherry on top.

The idea of allowing the part of the deception to be seen was to give not only credence to the notion that a Southern attack was the plan but also to allow Rommel’s forces to actually calculate the possible time of such an attack. Indeed they calculated that the pipeline would reach the Southern end of the line in early November so that the attack would occur within weeks of its completion.

Then plan worked, and Afrika Korps officers captured during the battle of El Alamein, confirmed that they had been prepared for a Southern Attacked that did not materialise.

The problem with parking nearly 30 feet of tractor, limber and gun, is that when they are en-train, they have a pretty obvious silhouette. Even towing a larger field gun without the limber, from the air it still looks like a a large field gun attached to a tractor.

The solution. Unhitch the gun and limber, rotate the limber 180 degrees and push them together so that the limbers tow hook slides under the field gun. Making sure the wheels are aligned properly. Put a Sun shield over the top and, hey presto, you have a truck. The tractor is disguised with its own shield so it turns into to a harmless transport.

Over 350 cannibals were deployed along with 150 dummy guns. 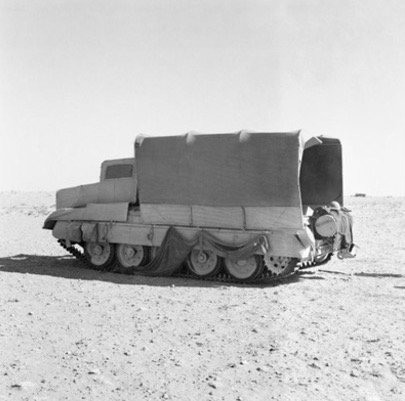 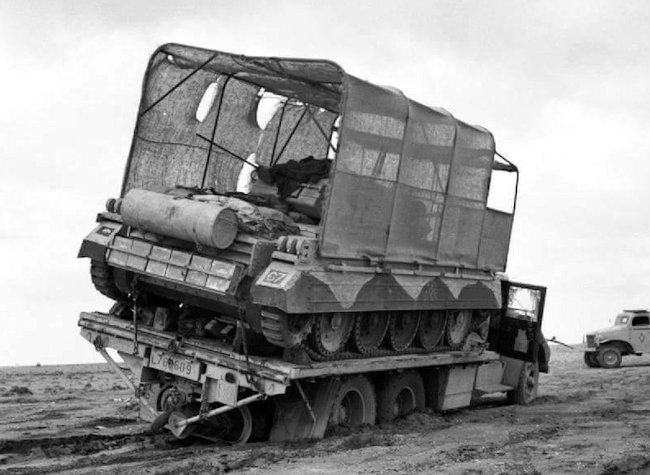 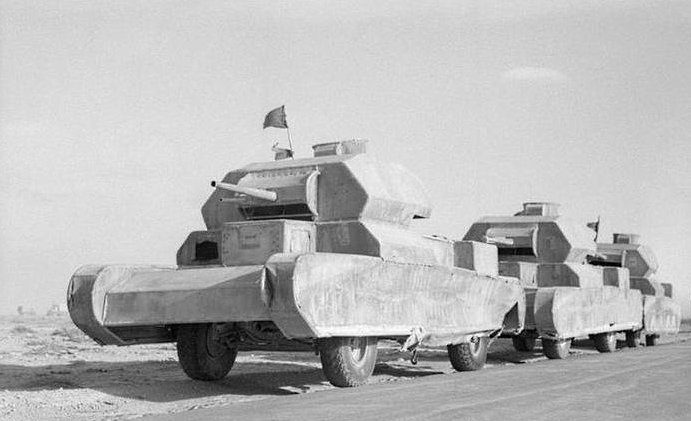 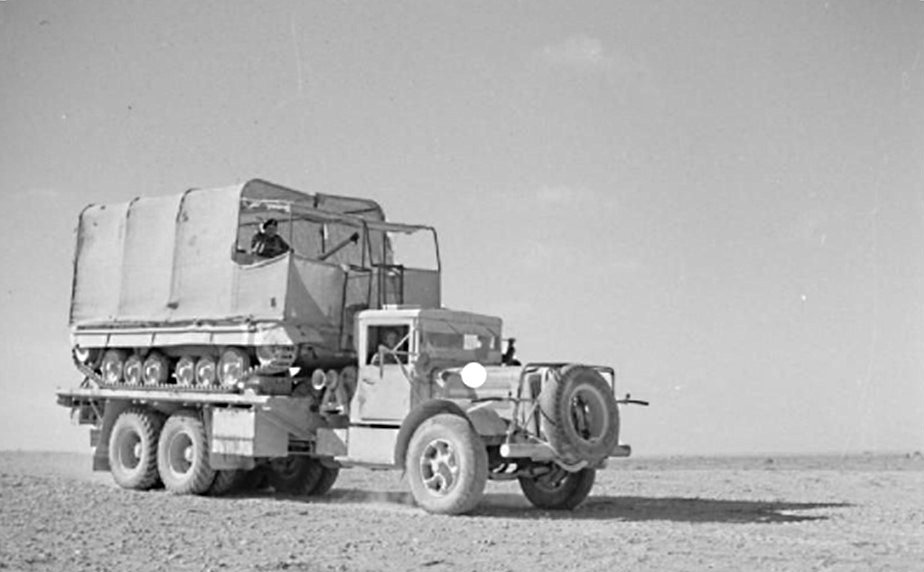