The author at work on the nose section of his scale flying model Zeppelin. A partially completed tail section is just visible on the left and the bracing method of the frames can clearly be seen.

SOME YEARS AGO, I BECAME interested in the possibility of building a flying model of a Zep­pelin, as I had long been intrigued by this unusual type of aircraft. After two abortive attempts, I realised that it was necessary to adopt a much more thorough, mathematical approach to the problems involved. After two months of calculating and build­ing, I believed I had mastered these problems. My efforts were rewarded one misty Sunday morning in 1963 when the 12-foot long model I had built rose from the wet grass of the local park. Despite the erratic performance of the tiny glow-plug engine, the airship flew for an hour, with an interim topping up of gas. This 12-foot model was, in my opinion, the absolute minimum size for a working model zep­pelin, and had many faults, but it gave me the incentive to try a second time. I decided to make a much larger model. which could cope with the extra weight of scale detailing, gasbag sub­division, two diesel engines and radios control.

The new craft was to have been a 22-foot long model of the Navy Zeppelin L.9, but was never completed due to lack of funds and storage space. However, I believe that with this design, the peculiarly fascinating problems of this type of model aircraft were. well understood. For those who are interested in causing a sensation in the local park or flying field, I will explain the necessary approach for air­ship modelling, using the 12-foot model as the example. I will also indicate how to build a scale model of the German P type Zeppelin from the superb plans in the June 1971 issue of Military Modelling. 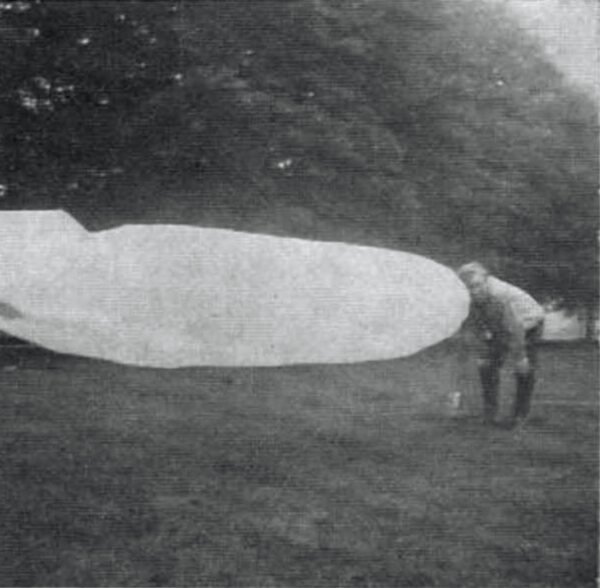 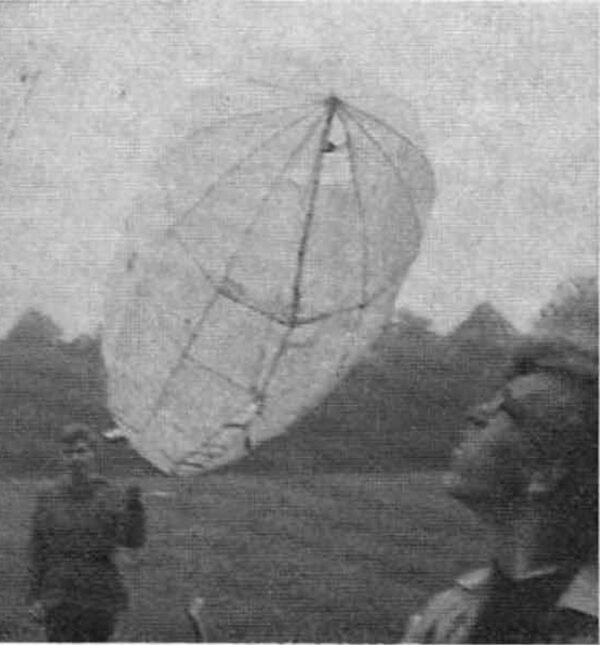 Three shots suitably illustrate just what airship modelling is all about: at left, the model poses full of gas at its mast while, centre, the author and an assistant launch the giant model on an early tethered flight. At right, the model is led home after a successful test flight.

For the hull framework, 1/6 in. square obechi strip was used. This weighs 0.014 ounces per foot (10 lb./cu.ft.) and offers a better strength to weight ratio than any comparably-priced mat­erial that I know of. The hull was made in two 6-foot long sections for storage reasons; each section had six transverse frames and 14 longitudinals, of which three formed the keel.

Due to the choice of a single gasbag, it was not possible to cross-brace the frames, and the peculiar construc­tion of frames 1, 6a, 6b and- 11 was necessary to give some rigidity to the hull. These hull sections were covered with the lightest tissue paper available, which was water-shrunk, rather than doped. To cover the 72 sq. ft. of hull surface with dope would have made it far too heavy to fly.

A glance at the column of weights will indicate the in­credibly light structure that re­sulted from this construction method. To my delight, and to be honest, my surprise, the hull proved robust enough to with­stand the bending forces of flight, as well as the clumsy handling it received from the over-enthusi­astic ground crew. 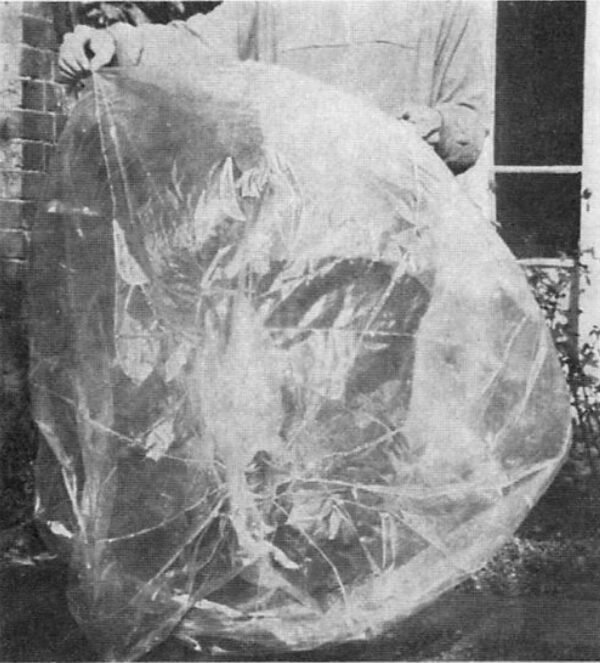 The gasbag was made of light­weight polythene, and leaked badly. (I had optimistically used Sellotape to join the gores. On the later L.9 model, I used heat­welded seams that gave excel­lent results.) This gasbag was the least satisfactory feature of the model.

At eight ounces, it weighed as much as the entire hull structure, and I decided against subdividing it, for fear of exceeding the strict weight limits. Power was provided (occasion­ally) by an unreliable glowplug engine, driving a 6 in. prop. The engine, with its pod, and mount­ings, added 5 oz., bringing the total weight to 21 oz. This left 2 oz. of surplus lift, which was taken up by fuel and tiny lead ballast weights.

To avoid strain­ing the framework, the engine was removed with its pod tor starting, and clipped on to the hull when running. Fortunately, the exhaust temperature was be­low the ignition temperature of the hydrogen; though on reflec­tion, I would have preferred an engine with a proper exhaust sys­tem.

The possibility of having my head blown off seemed very re­mote at the time, but looking back on the episode, my safety precautions do seem to have been rather inadequate.

One important point about fill­ing the gasbag of an airship with a rigid frame, is that it is un­necessary and undesirable to pressurise the bag. The lifting gas works best at atmospheric pressure.

For the first flight of my 12-foot model, it was attached to a kite­line, before gassing up. The en­gine, already running, was at­tached to the frame, last moment ballasting done, and the model released. Flying stably, it reached about 8 m.p.h. and eventually climbed to 250 feet, disappear­ing in the mist. The weight of line it was lifting at this altitude prevented it from climbing fur­ther.

During this time, the rate of fuel consumption roughly equalled the rate of gas leakage, and maintained the overall lift at a constant figure. When the engine cut out, the airship gradually lost height and re-appeared from the mist. Unfortunately, the centre of lift had shifted with the surge of the remaining gas to the nose. This produced a rather nose-up angle, which increased as the craft neared the ground. The model was completely vertical by the time it landed, and upon touching the ground, it balanced in this erect position, rocking gently. After topping up the gas­bag, another flight was made without the engine, with very similar results.

However, I was well pleased with my first ex­perience of Zeppelin flying, and walked the model home. The marginal spare lift of this design did not allow subdivision of the gasbag to reduce the gas surge. Consequently, after fur­ther flights, to use up the hydro­gen I had purchased, the model was scrapped.

The theory of lighter-than-air craft is simple, though the prac­tical aspects are often complex. Airships, like submarines. work on the principle of displacement: that is to say, one cubic foot of hydrogen of mass 0.1 ounces dis­places one cubic foot of air of mass 1.9 ounces, giving a gross lift of 1.1 ounces/cubic foot.

mass 0.1 ounces dis­places one cubic foot of air of mass 1.9 ounces, giving a gross lift of 1.1 ounces/cubic foot.(This is for pure hydrogen at at­mospheric pressure.)
For helium, this figure is a little lower at 1.0 ounces/cubic foot. No other gases give useable lift. Hydrogen burns readily in air, and if mixed with air, can explode violently. Helium, though not inflammable, is con­siderably more expensive than hydrogen. If you intend using hydrogen as the lifting gas. do not allow a naked light, or elec­trical spark anywhere near the gas under any circumstances.

The 12-foot model, with its fairly fat shape ( length to dia­meter ratio of 6 to 1) had a gas volume of 23 cubic feet, which should have lifted 25.3 ounces. However, due to the residual air trapped in the gasbag before in­flation, the actual lift was only 23 ounces. It should be clear, that if the total weight of such a craft exceeds 23 ounces. it will not leave the ground. It is an essen­tial part of airship construction, never to exceed calculated weights, or all the work will be in vain. All parts should be weighed before, during and after assembly.
This is vital.

For modelling the P Type Zeppelin, the greatest problem is that of size. In an ,airship, the majority of the weight is concen­trated on the surface of the hull, while the lift is a volumetric function. Consequently, the best volume to weight ratio is achieved with a short, stubby hull.

The P type, like n;iost early Zeppelins, was relatively long and thin, and in order to fly, the -scale model needs to be at least 20 ft. long. It seems that the optimum scale to work on would be 1/25th, giving a length of 21.4 ft. The hull can be split into five sections for storage, and the resultant sub­division of the lifting gas into five separate bags will greatly reduce the gas surge.

This is avoided virtually completely if the bag bags are leakproof.) I would choose to split the hull at frames 4, 7, 12 and the intermediate frame between 9 and 10. These divisions do not interfere with the engine car mountings, nor with the tail fins. The added  strength thus produced between frames 9 and 10 can be used to support a localised load such as a radio control unit.

Propulsion could be by two diesel engines of 1.5 c.c. or 2.5 c.c., one in each gondola. The scale propeller size is suitable at 8 inches. The maximum speed in still air should be between 20 m.p.h. and 30 m.p.h.

For those who desire greater lift, it would be simple to model the Q type Zeppelin, which was simply a P Type lengthened by 49 ft. In 1/25th scale, this would require an extra parallel hull section be­tween frames 9 and 10, almost 2 ft. long. This would increase the gross lift from 75 to 84 oz., for little increase in weight.

The plans and weights given here are for the P Type at 1/25th scale, and within reason can be altered to suit the modeller’s re­quirements. However, I would not advise building to a smaller scale unless exotic materials are avail­able, and price is no object.

Practical suggestions: Hull construction requires a delicate touch, great patience, and above all, a room that will not be invaded by well-meaning people of clumsy disposition.

Use as little glue as possible, and be sparing with any balsa-bracing gussets. Check the alignment of frames and longitudinals carefully, as in a long, thin hull of this type, any errors will be painfully ob­vious.

If you intend using HELIUM as the lifting gas, reduce the lift figures given here by 9 per cent.
If using HYDROGEN, be careful.

(Both gases can be obtained from British Oxygen Co. in cylinders containing 110 cu. ft. or more.)

When you begin building a model Zeppelin, your wife / mother/girl friend will think you are mad. When you are about half-way through the job, you will probably agree with them!

But when your monster first stirs it­self from the ground, and lifts silently into the sky, it will all seem very worthwhile. 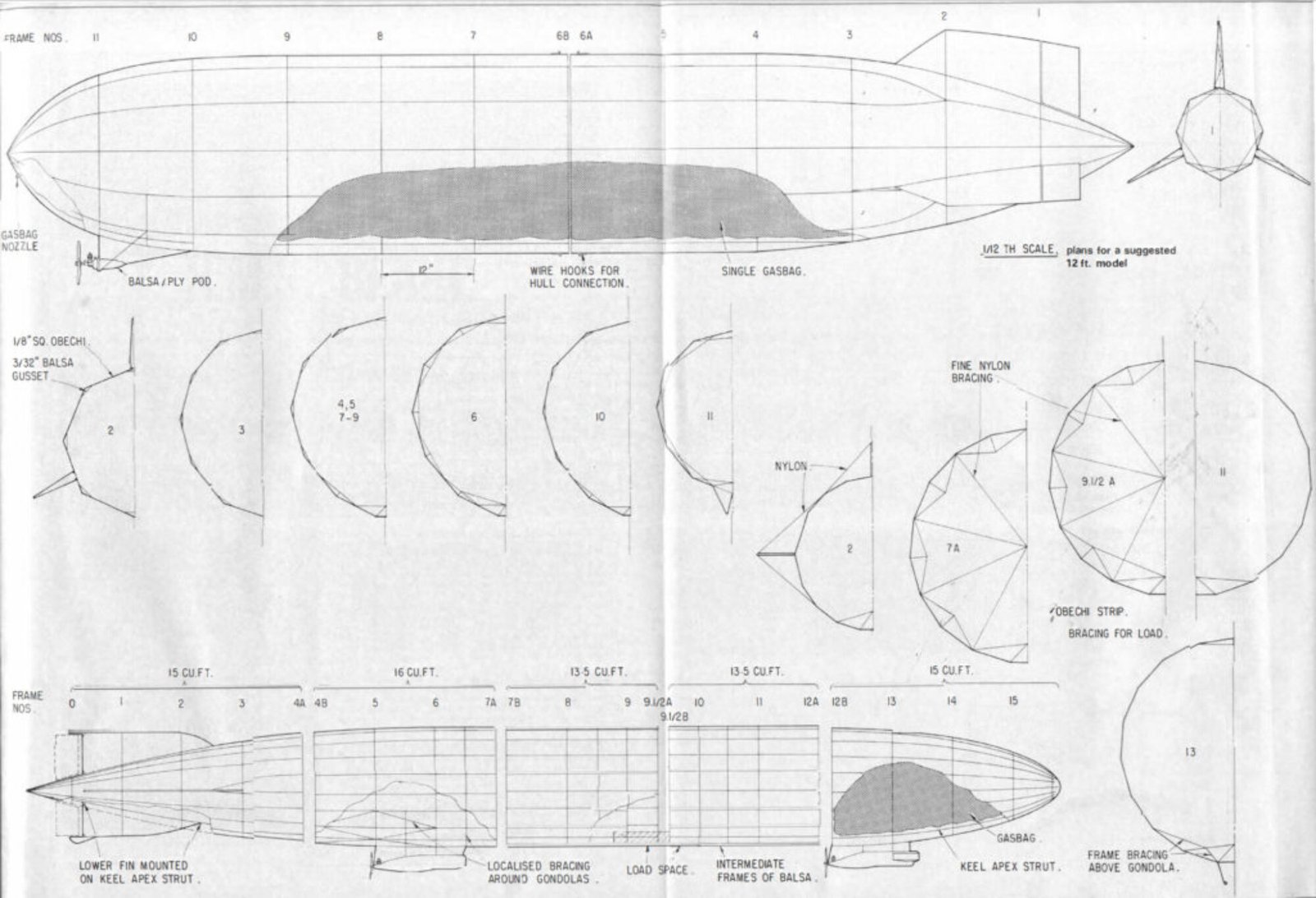