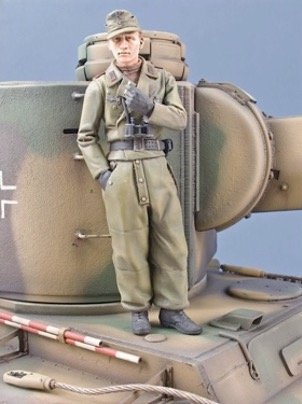 A Source of Ridicule!

After trying several different methods I had always found the tutorial that Mark Bannerman had posted on Missing Lynx several years ago to be of the most help, even if I failed each and every time to adequately execute all of the tips painstakingly laid out by Mark.

No, it has not been an illustrious range of figures that have adorned the tanks and armoured vehicles in my armour features, and there has been very little anyone could glean from my figures, aside from which pitfalls to avoid on the road to superior figure painting.

Having done some demonstrations at Euro Militaire alongside Rob Henden at the Iwata stand, I felt confident after watching him do it live that he was indeed onto something, and when the opportunity presented itself, I too would see what results I could come up with after attempting to paint a figure using an airbrush.

This opportunity appeared very soon in the form of the Calibre Models 1:16 scale KV-2 754(r) as this model cried out for a figure to enhance the awesome sense of scale when it came to photographing the completed model. After a fairly exhaustive search for a suitable figure, I found the Alpine Miniatures Panzer Officer Grossdeutschland on the AFV Modeller magazines Website, which looked to be a very promisingly posed figure with plenty of detail. A few days later the neat little package turned up on my doorstep and I was not disappointed in the least when I peered curiously inside the box. Pulling back the protective black foam revealed one of the nicest figures I had ever seen, sculpted to perfection by Mike Good, a name I recognized from the 1:32 scale Fisher Models Sea Fury pilot.

Very intelligently broken down, the figure can be painted for the most part in the sections it comes in and assembled without any filler being required after the painting has been completed. Needless to say, I was very anxious to get this figure underway as soon as possible. After the removal of some of the awards and badges that would not look right on a figure posed alongside an auxiliary units vehicle, Panzer Officer GD was ready for some painting.

When it comes to my models I do extensive shading on the camouflage pattern, so I was quite comfortable with the concept of tonal change to represent highlights and shadows. After the entire figure had been primed using Alclad Grey Micro Primer, the uniform clothing was the first area to paint.

… I was very anxious to see the results …

I chose a fairly neutral shade of green for the uniform, with just the right amount of grey in it to match the magnificently painted figure on the packaging that the figure arrived in, which was painted by Calvin Tan.

There is not much to report on the assembly of the figure aside from the fact that it is extremely well engineered and the fit is superb. All of the components fit together with ease, and only the slightest amount of super glue as a filler was required around the left arm.

Priming was executed using Alclads Sublime Grey Micro-primer and filler, a base that goes on so thin it will not obscure even the finest detail, while providing an excellent adhesive surface for any paint I have ever used.

Painting began with the head, for no particular reason other than the fact that I was very anxious to see the results I could achieve with my Iwata TR-1 in blending skin tones.

Each step would proceed cautiously and every stage would be protected with a coat or two of Johnsons Klear as an acrylic varnish. The logic being that an acrylic varnish would form a protective barrier between each of the enamel coats.

Normally I would use White Ensign Colourcoats throughout, but unfortunately I only had Afrika Korps Desert Yellow in my paint locker to provide a suitable Ochre type base for the flesh, with the rest of the paints coming from Humbrol. In recent years Humbrol have gained a somewhat less than stellar reputation for consistency when it comes to the quality of their paints, black and white being particularly noted for their lack of co-operation at times. As luck would have it, having used Humbrol for years, I had several shades of red, flesh and orange in the old Super Enamel range that must have been languishing in my paint box for at least a decade. These were produced when Humbrol was a notable paint manufacturer and despite their age, they performed perfectly through the airbrush.

Iwata to the Rescue

With the base colour safely protected with gloss, the first shades of darkened flesh tones were sprayed in a pattern that mimicked Rob Hendons methods as best I could. Using myself as a reference I applied the darkened tones to areas that seemed logical to me, in the cheeks and other facial recesses. Again covering this with a coat or two of gloss varnish, the highlights were then applied, spaying in a downward manner, from above the head (003). The cap posed some problems here, and thus some careful angling of the airbrush was required, the saving grace was the fact that the paint cup on the TR-1 is adjustable and, therefore, easily angled to allow additional manoeuvrability. Once again the last step is enclosed with some acrylic varnish and once this has dried a coat of straight flesh is misted over the top to blend the highlights and the shadows to give a more natural appearance.

Adding the whites to the eyes of any scale of figure has been a messy proposition for me, and this is where the addition of a protective coat of varnish comes in handy, as any excess is easily removed using a fine brush dipped in white spirits. The cornea can then be added using a toothpick dipped in black paint in this instance. Some guys far more skilled than I would even go so far as to add colour, but for me that is a little beyond my scope at this point, although there is no reason why I would not try in the future as my figure painting abilities improve along with my confidence.

After painting the uniform overall dark green with some hints of blue grey added to achieve what to my eye appeared to be a great match for German Uniform Field Grey, using the same method of darkened shadows and lightened highlights (achieved with White Ensign Colourcoats black and white respectively) the entire figure was treated to a few coats of gloss varnish, in preparation of the painting of the fine details, once again to ensure that the removal of any errant brush strokes was a simple task.

Once all of the detail had been painted it was time for yet another few coats of gloss as a final layer of protection (the key to applying many coats of gloss varnish is ensuring they are applied thinly and carefully) from the oil wash, in the form of a mixture of Winsor & Newtons Raw Umber and Paynes Grey in order to highlight the detail and accentuate the shadows. Once this had dried and the excess removed using a cotton bud soaked in white spirit, the entire figure was coated in matt varnish, and at that point completed.

A Source of Inspiration?

Being fully aware that this figure and article will not be to the same standards as the other features in this figure painting special issue, I hope that it will provide some inspiration for those of you not very confident in the figure painting arts to have a go at a figure using methods you would not have thought to try before. Everyone needs to take those first tentative steps into the realm of subject matter they dont normally model in comfortably, and for my part I was very glad I did, and extremely pleased with the results. I know it is not perfect, but I am also aware of the fact that I learned a great deal of dos and donts with this figure, and a new confidence for future projects. I also hope that by seeing the improvements I have made by simply having a go as it were, it will provide some inspiration as well. 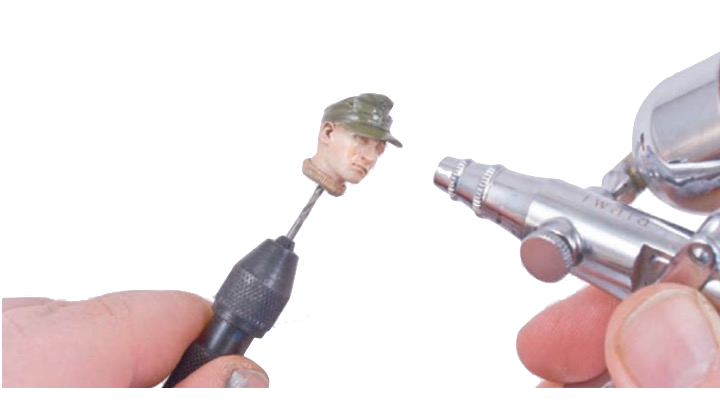 Normally I would use White Ensign paints throughout, but unfortunately, I only had Afrika Korps Desert Yellow to hand to provide a suitable Ochre type base for the flesh. Highlights were applied, spaying in a downward manner, from above the head. The cap posed some problems and some careful angling of the airbrush was needed. The paint cup on the Iwata TR-1 is adjustable making it easier to change its angle and attitude when spraying. 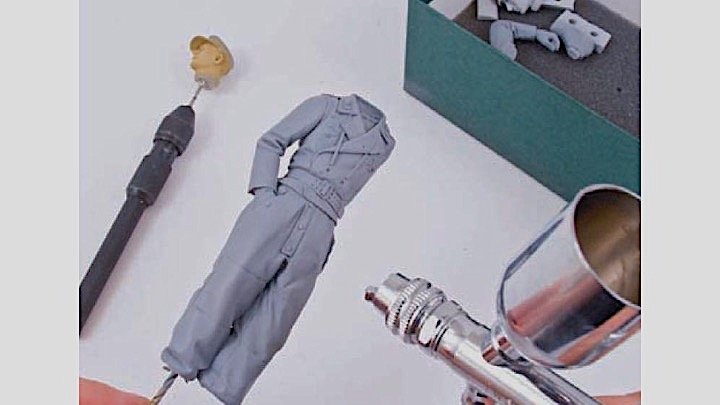 Priming was done with Alclads Sublime Grey Micro-primer and filler, a base that goes on so thin it will not obscure even the finest detail, and it produces an excellent adhesive surface for any paint. 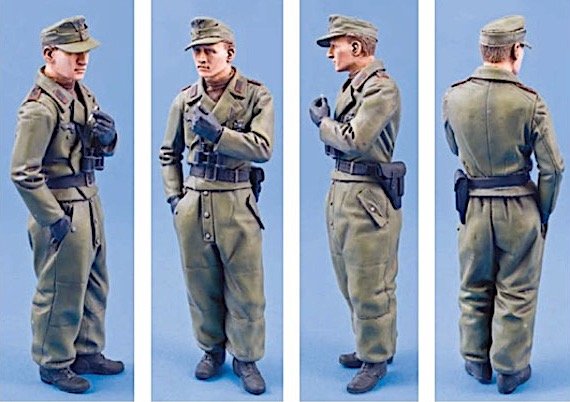 The finished 120mm figure not bad for a ridiculed armour modeller!

My figure finished and displayed on a captured Soviet KV-2 the Calibre Models 1:16 scale KV-2 754(r) that is the subject of another Military Modelling magazine article.