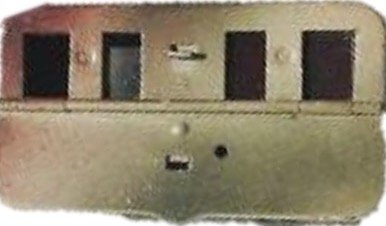 The following U.S. military report on night-driving lights and equipment for German vehicles is taken from Tactical and Technical Trends, No. 9, Oct. 8, 1942.

“Further details are now available on the operation of the special night-driving equipment with which German military vehicles are equipped and which was briefly described in Tactical and Technical Trends, No. 1, p. 21. It is believed that the equipment is sufficiently ingenious in its design to warrant a complete study at this time.

The equipment consists of the following parts:

(a) The blackout headlight. This is mounted on the left-hand side of the vehicle between 32 and 48 inches from the ground.

(b) The special interval-judging tail light, and stop light. This is carried on the left-hand side of the vehicle (see accompanying sketch, Fig. 1).

(c) The additional tail light, fitted with a dimming device, and carried on the right-hand side of the vehicle (Fig. 2).

(d) A five-stage dimmer switch on the dashboard (Fig. 3).

a. The headlight is of a peculiar flattened shape, and employs a horizontal 35-watt lamp which gives off light to the rear against a semi-oval mirror. This mirror in turn reflects the light back through a glass diffusion-panel under the overhanging hood.. A soft, almost flat-topped beam of light results. The beam is projected for a length of 30 to 40 yards and a width of about 25 yards, and is particularly diffused toward the edges.

It is claimed that the beam from the headlight is invisible when on “low” from heights exceeding 1,600 feet; when on “medium” above 2,600 feet; and when on “full” above 4,800 feet. The same distances also apply to ground observation, horizontally.

b. The interval-judging tail light and stop light (Fig. 1) consists of a panel divided into an upper and lower half. The upper half comprises the interval-judging device itself; the lower half consists of a normal red tail light, and a yellow stop light which functions when the brakes are applied. The half which is not in use is obscured by a shutter which is hinged about the horizontal axis of the panel.

The upper half of the panel, the interval-judging device, has four small rectangular windows, grouped in two pairs, and showing a yellowish-green light.

The operation of this device is based on the limitations of the human eye, which is capable of perceiving adjacent sources of light as actually distinct and separate only within certain distances.

All that is required of a driver in a column is that he keep such an interval between him and the vehicle ahead, that two points of light are always visible. Thus a column interval of 25 to 35 yards will be constantly maintained.

On the under-side of the housing which contains the interval-judging device is a shutter which, when opened, allows a dim light to be shed downward on the license plate.

c. The right-hand tail light (Fig. 2) is compulsory under the German regulations, which require the vehicle-width to be indicated from the rear, as well as from the front. The fixture has two windows, one above the other, the upper one showing a dim light, the lower one a normal light. The change from one to the other is effected by turning a rotary shutter.

d. The Apparatus in Use

The degree of light can be varied according to the proximity of the enemy, by different switch positions. (See five-stage dashboard switch, Fig. 3.)

STAGE H — Blackout headlight out; only the interval tail light on. This is used when driving in column if the nearness of the enemy makes it necessary for vehicles to drive without the blackout headlight, or for the leading vehicle only to have the light on. Cannot be detected from the air, and on the ground not beyond 300 yards.

STAGE V 1 — Blackout headlight giving minimum light; interval tail light switched on. To be used on very dark nights when in the proximity of the enemy, and always to be used when driving into artillery positions, assembly points, etc. Cannot be detected beyond 500 yards from the air or on the ground. On lighter nights, instead of V 1, Stage V 2 can be used without danger, but not in the immediate neighborhood of the enemy.

STAGE V 2 — Blackout headlight giving medium light; interval tail light switched on. To be used near and behind the front, e.g., when advancing to the front. Cannot be detected from the air or on the ground beyond 800 yards.

STAGE V 3 — Blackout headlight giving maximum light; and interval tail light switched on. To be used during blackout exercises in peacetime, etc. Cannot be detected from the air or on the ground beyond 1,500 yards.

Where there is no actual danger of recognition by the enemy, vehicles can travel with the blackout headlight full on, and the rear license plate illuminated, as well as with the two tail lights and the stop light at their full strength. In other words, the dimming-switch will be at Stage V 3; the hinged shutter on the interval-judging panel will be up, covering the four windows of the interval tail light, and exposing the left-hand tail light and stop light; the shutter underneath will be open, permitting light to fall on the license plate; and the right-hand tail light will be set to bright.

At any sign of the enemy, it is necessary to stop the vehicle and to make the following adjustments before proceeding:

The head light of the leading vehicle is switched down to the lowest possible point consistent with the darkness of the night and the danger of observation; the darker the night, the less light is used. 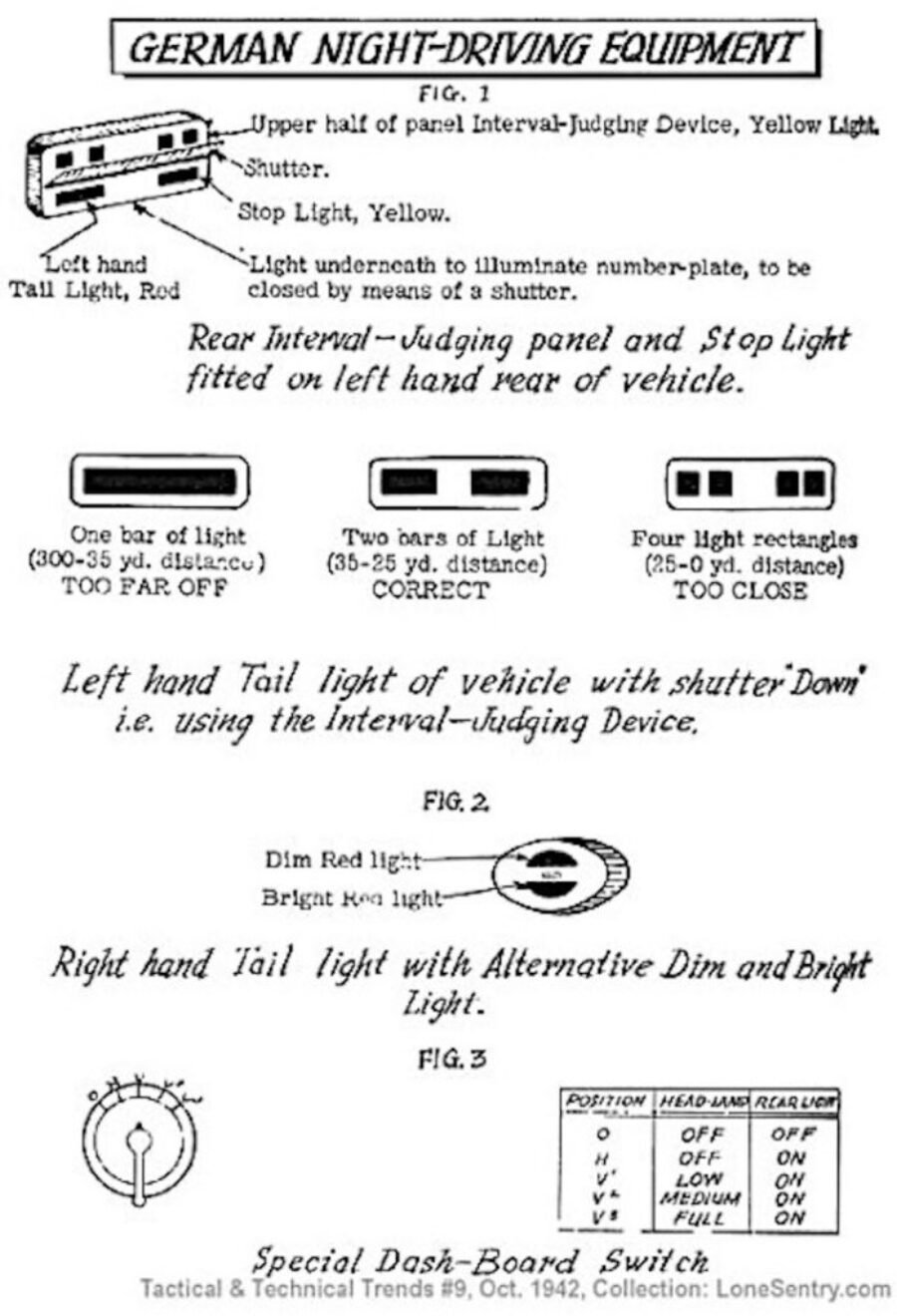