THIS VEHICLE had its origins in the determination of the Tank Corps in World War One to achieve a decisive penetration of the German defence system. The possibility of utilising a high speed tracklayer for this in 1919 was advanced by Major ( later Colonel) Philip Johnson early in 1918.

In April 1918 he disclosed to Colonel (later Major General) J. F. C. Fuller, then G.S.O.1 and planning officer to the Tank Corps in France, that he had designed lightweight tracks and spring suspension which promised speeds and a circuit of action far beyond those attained by any tanks then in service.

Fuller then called a Tank Corps Staff Con­ference for a month ahead to discuss the possibilities of a ‘High Speed Destroyer Tank’; in that month, he drew up a scheme for a surprise attack by armour upon the German army headquarters and rear organisa­tion, and Johnson drew up a specification for the tank itself.

Largely as a result of Fuller’s urgent advocacy, the Tank Corps adopted the scheme and ob­tained War Office approval of Johnson’s specification. John­son was promoted Colonel and sent to England to get proto­types built and production or­ganised, and to expedite this he was given a Department of Tank Design and Experiment, at first responsible directly to the War Office.

For security reasons the appellation ‘High Speed Des­troyer Tank’ was dropped, and the machine was designated Tank, Medium, Mark D. Three prototypes were designed and built, differing slightly in dimen­sions and in control systems.

They were called the D, D Star, and D Two Star. The first one (D) was run in March 1919, and demonstrated at Roundhay Park, Leeds, in May 1919, when it made a spectacular debut by driving at 20 m.p.h. straight at the clustered V.l,P,s, then swerving away at the last mo­ment. It added to this terrifying performance by catapulting some of its detachable wooden sole-plates at the spectators as it turned – some of whom, John­son said later, broke ranks and fled!

Thus, World War One had ended long before the Medium D and Fuller’s scheme could be used. The latter, although framed to suit the conditions in France in 1918, was of general application in that it was based upon the

psychological effect to be gained by operating against an enemy’s brain and stomach instead of his fighting front. Ful­ler continued to advocate this as the most profitable employment for machine age armour, and was joined by Capt. ‘B. H. Lid­dell Hart (now Sir Basil Liddell Hart, D.Litt.), whose theories in a number of respect were more subtle, far-reaching, and immedi­ately practicable.

The vision of these military prophets was de­cried as ‘tank mania’ in their homeland, but was taken up seriously in Germany, and amply vindicated in World War Two, and again as recently as the 1967 Israel-Egypt war.

The ‘D’ itself, although the world’s first fast, long-range tank, had a short life and no direct progeny. It had been de­signed specifically for use in a brief campaign on the soft, fairly flat terrain of Northern France, and both its suspension system and its fighting compartments were unsuited to general service.

Below:
The world’s first fast tank; the prototype Medium ‘D’ de- signed in 1919.

It was very long, to pass, tren­ches and sunken roads, and very narrow, to fit certain bridges and the railway loading gauge. This could have caused serious steer­ing problems, had not Johnson shaped the lower track run to have only 10 feet flat.

The turret did not revolve, had insufficient exits, was armed only with machine guns, and was so ar­ranged that the tank commander drove the vehicle.

It would have served ‘Plan 1919’ (as Fuller’s scheme, ‘Strategical Paralysis as the Object of the Decisive At­tack’ came to be called) but something better was needed for the future. Johnson maintained that he received no instructions or requirements with regard to this – and was then blamed for not making improvements.

The spring suspension consisted of wire cables stretched fore and aft, and tensioned by coil springs at the front end. Pulleys

on the bogie units bore up against the cables, which were held down by fixed pulleys on the track frame.

It was a light and simple system which gave a fast, buoyant ride, but exces­sive strain soon broke the cable, when the entire system on that side failed at once, immobilising the tank. On the credit side, Johnson had built a tank with a large power reserve, capable of sustained high speed (28 m.p.h. on a slight down grade, 23 m.p.h. on the level, 17½ m.p.h. sustained on a moderate up­grade), and long range.

The standards of crew comfort and vehicle control were high, the tracks had a very long life, and the basic shape was very sound – the Chieftain today has a pro­file low in front and higher at the rear reminiscent of the ‘D’.

However, the decision was taken secretly to close John son’s department in 1923 and entrust tank development to In­dustry on a commercial basis. There was a certain amount of intrigue, and the ‘D’ suffered something of a smear campaign, its detractors alleging that it spent a month in workshops for every hour run. Johnson, and people who worked with him, have strongly denied this.

The exact truth may never be known, but it is certain that the decision to let Industry manage tank de­velopment was unwise, and that personal rivalries and ambitions played a significant part in tak­ing it. For Britain soon became a back number in fast tank de­sign, and the Department of Tank Design had to be re-estab­lished on the eve of World War Two, this time under Dr. Merritt.

It was formed too late to pro­vide a tank to fight in that war, but its first design, the Cen­turion of 1945, amply justified it. 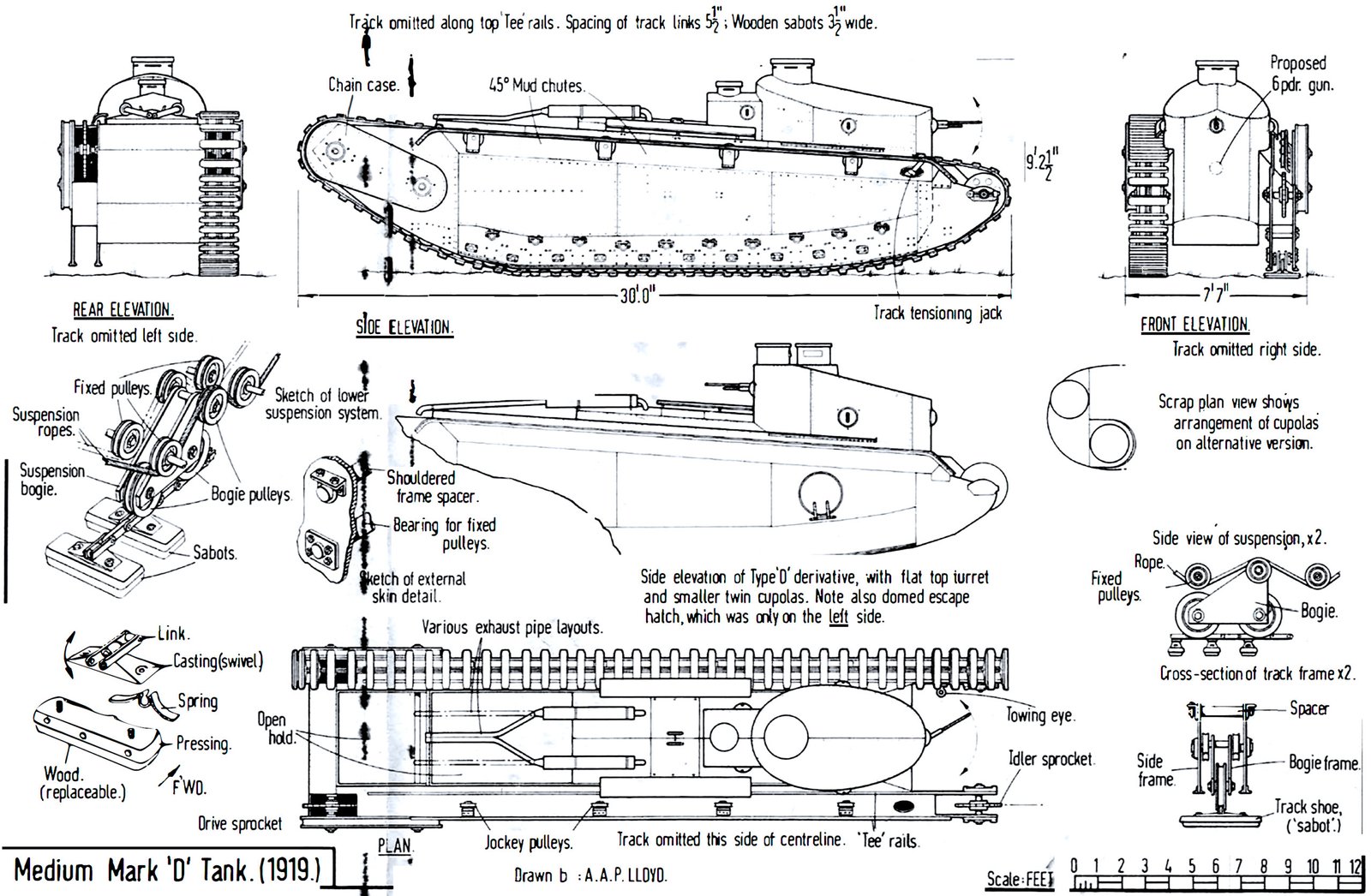 1. One of these prototypes was given a modified fighting compartment, with separate driver’s cupola and circular exit hatches in the hull sides. Con­tracts for 20 of these were negotiated, but very little build­ing was done, all work ceasing in 1924.

2. Johnson built a smaller ‘D’ tank called the ‘Light Infantry’. The track was laterally flexible having a tubular spine with ball and socket joints. The drive sprockets were twins, driving on the track shoes. Large radius steering was attempted by bow­ing the track. None of the above machines is described in this article.

3. All the ‘D’ machines were scrapped, and nothing remains of the world’s first fast tank except a length of suspension gear in one of the Schools at Bovington Camp. In my submission it would be an excellent thing if a skilled modeller could present a scale replica of the Medium ‘D’ to the R.A.C. Tank Museum.

A View to a Kill