THE NEW 88 AND ITS CARRIAGES

German experiences with Soviet heavy tanks have resulted in the production of some very powerful guns. Among these is the Model 1943  gun. This improved 88 has a very high muzzle velocity, which enables gunners to lay on and hit even distant moving targets with considerable ease. In fact, the trajectory followed by the projectile is so flat that, with certain sights, the gunner can make his own elevation calculations up to a range of 3,700 yards for high-explosive projectiles and 4,400 yards for armor-piercing projectiles. A trajectory as flat as this naturally means that gunners can open fire on tanks and other armored vehicles without preliminary registration. The rise of the shell in its flight seldom will be greater than the height of a tank.

Besides being used as a direct-laid gun, the variations of the Model 1943 can also fire either time-fuzed or percussion , high-explosive shells as far as 16,570 yards.

The verified armor-penetration capabilities of the Model 43 88’s are remarkable. With the newer type of 22.4-pound capped armor-piercing shell (with ballistic cap to provide streamlining), the following can be achieved: 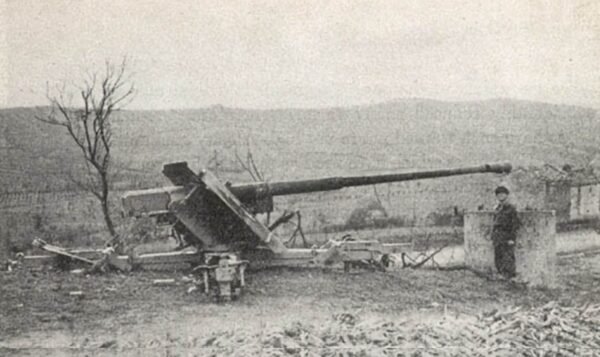 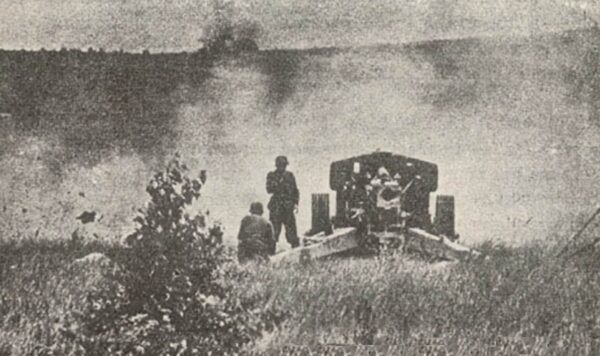 The Model 43 88’s have certain drawbacks, however. While raising the muzzle velocity, the Germans have tried to keep down the weight of the gun. The result is a light tube with a considerably reduced safety factor. Therefore, German gun crews have been warned not to use high-velocity ammunition in Model 1943 tubes which have fired as many as 500 rounds. To preserve the gun tube against erosion, they may fire high-explosive shell with a low-velocity propellant rated at 1,080 feet per second. This ammunition gives a maximum range of only 7,765 yards.

Thus far the Model 43 88’s have appeared in the new Royal Tiger tank; in the “Elephant” (formerly called the “Ferdinand”), the “Rhinoceros” (formerly called the “Hornet”), and Panzerjäger Panther tank destroyers; and on two towed carriages (the Pak 43 and the Pak 43/41). Of these, the heavily-armored “Elephant” chassis has been found to be too cumbersome and mechanically unreliable. The “Rhinoceros” chassis is too slow; its armor is open on top, and provides protection only against shell splinters and caliber .30 bullets. The Pak 43/41 ground mount also appears to be unsatisfactory. Its conventional split-trail artillery carriage must be so heavy (9,660 pounds) that the complete piece weighs almost as much as the 12,300-pound 150-mm medium gun-howitzer s.F.H. 18. Such a weight precludes manhandling, and is a great handicap in getting the gun trained on a target which appears from an angle not covered by the carriage’s 60-degree traverse. 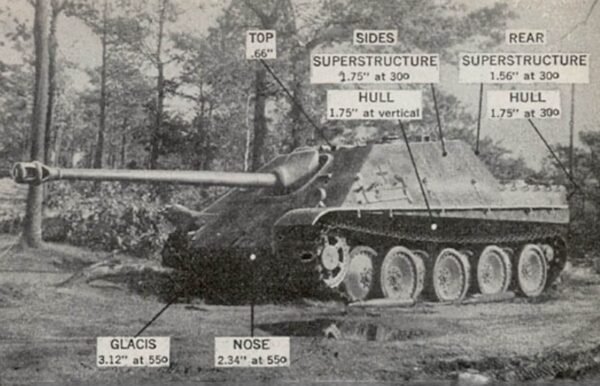 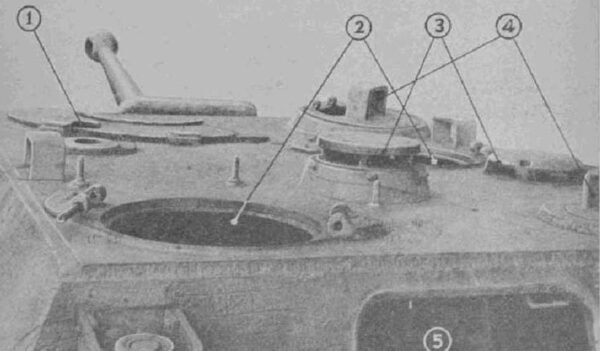 More suitable is the Pak 43 carriage, which has wheel bogies in the front and rear, like all 88-mm Flak 18. This carriage not only better distributes the weight over the ground, but permits firing from the wheels with a 60-degree traverse. If the out riggers are emplaced, full 360-degree traverse is possible. With bogies removed, the Pak 43 has a very low, silhouette for so large a piece. Emplaced on commanding ground, the capabilities of its high-velocity tube and all-round traverse make it a formidable weapon. In the case of the Pak 43 illustrated on page 53, the site chosen was on the forward slope of a hill. Thanks to its range, and to the lack of cover in target areas, the gun could open instant and effective fire as soon as hostile infantry or vehicles were detected on the crests of surrounding hills, or in the defiles between them. While the Pak 43 on this carriage offers formidable opposition for armored vehicles and direct-laid weapons, its light shield (two thicknesses of 5 mm each) gives no side and rear protection for the gun crew. As a result, the Pak 43 is especially vulnerable to indirect-laid artillery fire.

In this last respect, the Panzerjäger Panther is an improvement on the Pak 43. By mounting the Model 43 88 in a well-armored box on a Panther chassis, the Germans have provided good protection for crew and gun. Because of the Panther chassis, the Panzerjäger Panther is also a very handy weapon. Little traverse is built into the gun mount, but the Panther suspension is so built that the driver can swing the chassis around without forward movement. At present the Panzerjäger Panther is believed to be used as an unusual infantry-support weapon. Dug-in well to the rear of the main line of resistance, it uses its long-range, direct-fire capabilities to deal with elusive targets attacking German positions. Its excellent armor ordinarily would permit it to act as an assault gun, or to fight tanks at close range, but scarcity of tanks and bombed-out production lines cause the Germans to keep the Panzerjäger Panthers out of close-range fighting, except in emergencies. In their present role of linking up strong points, these vehicles may prove difficult weapons to combat, especially when their suspension is protected by digging-in.

The well-armored Royal Tiger is better armed than the standard Tiger. The Model 43 88 has a length of 71 calibers (71 times 88 mm), as compared with 56 calibers for the older Tiger’s KwK 36. The Model 43 has a muzzle velocity of 2,460 feet per second with high explosive, and as much as 3,708 feet per second with armor-piercing rounds. Since the time of flight of an armor-piercing round at a range of 2,200 yards is 2.2 seconds or less, accuracy and correction of fire against moving targets is greater than with older tank and antitank guns.

Of the carriages for the new Model 43 88, the best known is the improved Tiger tank called the Royal Tiger (Königstiger). This Tiger, first introduced on the Eastern Front in the winter of 1943-44, weighs 75 tons in action (more than 66 British tons). Just as important as the gun to the Royal Tiger’s combat efficiency is its new armor, which is sloped for added resistance to armor-piercing projectiles (see page 57). In fact, the Royal Tiger looks much like the Panther, except for the fact that the side superstructure armor slants upward from rear to front. The turret is noticeably different, also.

As in the case of all recent German tanks, the tracks of the Royal Tiger are very wide — 2 feet 8 1/2 inches. This not only lessens the likelihood of serious damage by a single mine, but means that the weight is so distributed that the tank can climb a 35-degree slope or a 2-foot 9-inch step, and can ford streams 5 feet 9 inches deep. The Royal Tiger can do 24 miles an hour on roads, but only 9 to 12 miles an hour in cross-country travel.

For close-in defense, the Royal Tiger has a coaxial 7.92-mm machine gun next to the 88, and another in the hull. An anti-aircraft machine-gun mounting is fitted on top of the commander’s cupola. The crew of five (the commander, gunner, loader, who are in the turret, and the driver and radio operator, who are in the front of the hull) have only one pistol port. This port is in the door in the rear of the turret, and consists of a conical plug closed by a chain. If the crew find it necessary to open hatches for observation or to use small arms, the following openings are available:

Hatch on top of commander’s cupola.
Hatch on right of top
Hatch on rear slope
Door in rear plate

Rounding Up the Booby Traps