Now for something completely different!

Recently I was lucky enough to obtain a copy of the maintenance manual of a WWll U-boat periscope. The manual describes the operation and maintenance of the ASR C/ 6 periscope.

This was the air search periscope of the Type XXI U-boat, the vessel which was to rekindle the U-boat war for the German. However, this new U-boat was produced too late in the war and never saw action.

Nonetheless this manual presented me with a whole pile of new modelling possibilities.

The most obvious idea was the view through a periscope, watching the sight of a merchant vessel being torpedoed.

As the Type XXI U Boat never fired a shot in anger I decided that I needed to convert the ASR C/6 periscope to the periscope that was used on the front-line Type VII U-boat, namely the NLSR C/11. Luckily, photographic reference material showed that there were only little differences between the two periscopes and these were incorporated into the design. A rear view of the finished half scale periscope.

The torpedoed vessel diorama would be completed using a 1:1200 scale cargo ship used for wargaming.

The periscope manual contained a number of cross-sectional engineering drawings from which l could work. These were scaled up with the use of a photocopier. The manual also had photographs of the periscope from all sides from which I could add the detail to my construction drawings.

The photographs from the manual were used throughout the construction as reference. A view through the eyepiece is difficult to photograph. The water spout and the stem of the ship can just be made out through the glass with its cross hairs. The periscope housing, with its side panel removed, was made up from balsa wood and faced with plastic card. Scenics for the interior. The background is a photograph of blue sky and clouds. The torpedoed merchant $hip is a 1 :1200 scale wargames water­line model with waterspout and deck explosion from Milliput and painted to suit. The torpedo track and ship's bow wave ,were painted on. The basic components are made up from wood, plastic sheet, turned aluminium, and other bits and pieces.

The periscope head was designed to be detachable from the main housing in order to hide the lighting and its on-off switch which would be added later.

The eye piece and the control knobs were turned and milled from aluminium to save weight. Having completed all the individual parts, all the components were assembled, primed and painted.

The operation instruction plates on the periscope model were made using Letraset dry transfers of varying sizes. 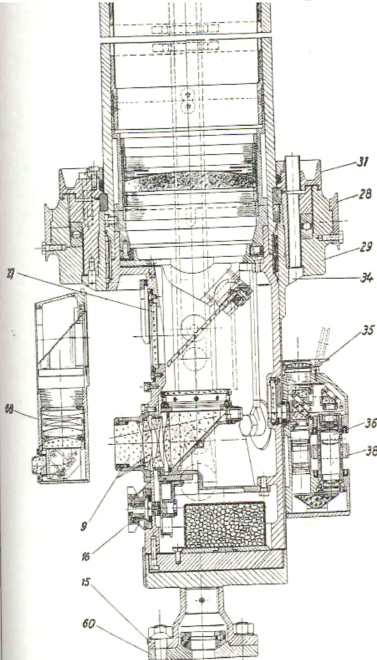 Side elevation sectioned view through the periscope taken from the manual. the eyepiece and its ground glass elements are numbered 9. The author used these drawings sized on a photocopier to build his 1:2 scale model periscope.

The diorama scene was built using a semi-circular base of sheet balsa covered with waves of modelling putty. This was painted with Prussian Blue, green and black oil paints.

The painted waterline vessel was then glued onto the base and bow waves were painted in. The backdrop was simply a photograph glued to the base. The explosion on deck and the water fountain were sculpted in Milliput modelling putty and were added to the scene after painting.

After completion the diorama was glued into position inside the periscope housing just below the bottom of the eyepiece.

Lighting was added in the form of two 9 volt bulbs, a battery holder and an on-off switch which were mounted underneath the periscope head.

The end result makes a great conversation piece although the view through the periscope is difficult to photograph. A plan section through the periscope taken from the German official wartime manual on the equipment. The section A - B is the view through the eyepiece. The side mounted levers for changing magnification between 6x and 15x are clearly visible. 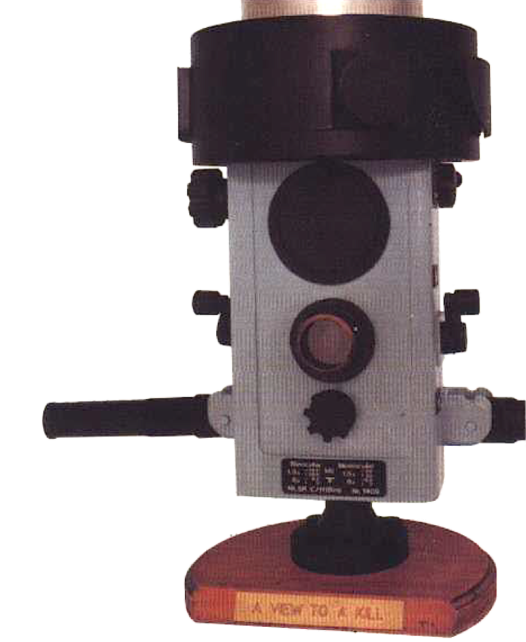 The finished periscope from the front on its wooden base. All lettering is rub-down dry print.