The horse Is surely one of the most noble of animals and, as far as its history in warfare is concerned. one of the most useful and faithful. It has suffered many of the privations together with its masters in the many campaigns from early times until quite recently.

Most modellers will want to include some cavalry 1n their collection at some time and then is no better or expressive medium for painting horses than artist’s oils.

Naturally, it is a subject in Its own right and deserves study as such. A badly painted horse looks awful: a well painted one is an inspiration. What I hope to do. over the course of several articles. is to give enough guidance to get you started. It is up to you to expand upon this.

Make use of your local library, even buy a book or two on horses to keep at your side and above all, practise.

The history of the horse is a complex subject and selective breeding has produced a great variety of types with exotic names. We need not get Into such complications.

The easy way of classifying horses is by colour, which means Just three main classifications. These are black, brown and red, horses of the last type being the most numerous.

I seem to have forgotten grey horses! I haven’t: these are due to nothing more than a pigmentation failure. Naturally, I shall show you how to paint these as well. but they are not actually a colour group on their own.

Within these three major groups are a greater number of sub-groups which will Interest modellers. since they will occur in connection with various historical periods and geographical locations.

These are shown in the drawings below.

Shows two white leg markings, known as:
(a) a sock and
(b) a stocking.
Rather obvious terms. You can usually Include or omit any of the markings in these figures as you see fit. If you are painting a number of horses, especially if they are in the same troop. you can produce an interesting variation among them by varying the types of markings for different animals of the same basic horse “colour”. Sometimes when referring to the colours of a particular horse. we talk about the co1our of its points. This latter term is merely a collective one for the mane. tail and lower limbs of the animal.

Black: a near-black pigment Is present throughout the coat. including limbs, mane and tail. The only other possible colour would be white markings.

Brown: the overall colour Is a dark brown, almost black, the points being of equal density.

Black-Brown:the dominant coat colour is black with the muzzle and sometimes the flanks, brown.

Bay Brown: dominant colour 1s brown; the muzzle is bay coloured (reddish-brown) and the limbs, mane and tail are black.

Bay: this most attractive colour ranges from dull red, almost brown, to a gold shade that approaches chestnut. Bays always have black manes and tails: the lower limbs are also often black. when they are known as bays with black points.

Chestnut: this is a gold colour of various shades. A true chestnut has its mane and tail the same colour as the body. although the tone of these may be slightly lighter or darker than the coat. A light chestnut often has a flaxen mane and tail.

Liver Chestnut: this Is a subdued chestnut colour, which approximates more to the dun or brown horse than to the true chestnut.

Dun:The blue dun has a body colour that can be described as a “weak black”. There may also be a “donkey” or dorsal stripe and/or a withers stripe. The mane and tail are black.

Yellow dun: by contrast, has a diffusion of yellow pigment in the

hair that is quite noticeable. There may be a dorsal stripe and. on occasions. zebra markings on the legs. Mane. tail and lower limbs are usually black.

Cream:this horse has a cream coat and an un-pigmented skin. The eye may appear pink or blue. due to the pigmentation deficiency. The points are also cream coloured.

Grey:this horse actually has a black skin, but this Is covered with an irregular pattern of white and black hairs. They are born an iron-grey colour and become whiter with age. When the coal is almost white, because of the black skin, this shows as light grey. Dappling Is quite common and may cover small patches only or almost the entire horse.

Roans: these are distinguished by their body colour. Blue roan: the body is black or black-brown, but the presence of white hairs gives a bluish effect. Toe hair on the lower limbs is usually black and there may be white markings.

Red roan: the body colour Is bay or bay-brown which, With the white hairs present, gives the coat a reddish look. The hair on the lower limbs ls usually black and there may be white markings.

Strawberry roan: this has a chestnut body colour Into which white hairs are mingled producing the characteristic colour.

Piebald: this is the British term for a coat that has large irregular patches of black and white.

Skewbald: This is the British term for a coat that comprises large patches of white and any other colour except black.

Palomino: a horse with a creamy-gold coat and a white mane and tail.

Appaloosa:This term is frequently and incorrectly used to describe a horse that has a spotted coat. 1n fact there are six basic patterns: frost, leopard. marble, snowflake, spotted blanket and white blanket. The distinctive features include a mottled skin on the muzzle and genitals, a white sclera (hard tissue} around the eyes, vertically striped hooves and wispy manes and tails.

Albino: this animal is all white. due to congenital absence of pigment from the skin. Eyes are pale blue.

Buckskin:this horse has a dark cream colour, akin to that of a pumpkin. Calico: this is an alternative name for the pinto. which is itself the North American term for piebalds .and skewbalds.

Pinto: general term for all part-coloured horses, including the Tobriano from the west and south.-west plains of the USA, which has a basic white coat with large irregul.ar black or brown patches; the head and neck are usually dark. while the legs are white from the knees down. Another name for pinto is paint.

Sorrel: this has chestnut-red-brown colouring, which can be light chestnut shade or something between a bright bay colour and a yellow chestnut. In the latter case, the mane and tail are reddish or white In colour. The same term can also be used for a red roan. Essentially. sorrel ls the American term for a chestnut. 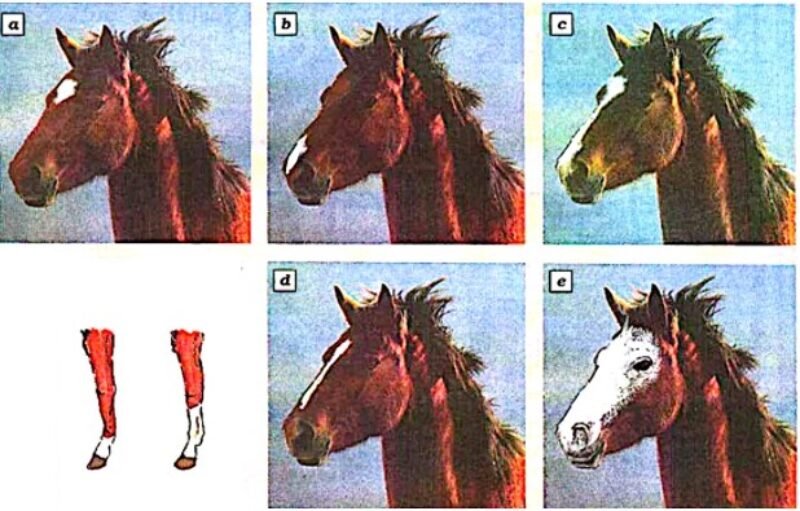 Sequence for Painting a Horse

The following is a suggested sequence for painting a horse. assuming that it is ready assembled and pruned. I would suggest a white primer as it will help some of the colours and also make the creation of highlights easier.

Several years ago 1 sat down and drew up a table of useful oil paints that I had found by experiment gave a sensible approximation to the major horse colours. This table ls reproduced opposite. It is given (like most of my advice!) for guidance, so don”t be afraid to branch out and modify It if you feel your efforts will give a closer result to the one you want to achieve. There are no hard and fast rules in oil painting and many modellers/painters have quite different approaches to obtaining what is essentially the same result. although with a touch of individuality. ln the table I have referred to a colour known as light red: this is a reddish-brown colour, in fact, from the Winsor & Newton range. Similar colours in the Talens Rembrandt range are: English Red and Indian Red. Next month we have a look at the painting of bay horses. See you then!