“We haven t seen any booby traps for the past two weeks.” That’s the kind of statement that can spell trouble if it leads to any slackening of precautionary measures. As soon as Allied vigilance relaxes, the stage is set for the Germans to use one of the most vicious techniques of modern warfare. A technique, incidentally, at which the enemy is highly proficient.” A well-prepared booby trap looks like a perfectly harmless object, of course. A bicycle resting against a farm house, a wheelbarrow standing outside the barn, a bucket waiting to be dipped into the cool well—these are everyday sights in the country, and yet nothing is simpler than for a German soldier to connect each of these to a pull-igniter before his unit withdraws. Clearly, certain elementary precautions are necessary when it is known that the enemy has occupied, or even merely passed through, a certain area. Trip and tension wires may be present in what seem to be the least likely places. After all, traps may be detonated by any normal activity such as opening a door or window, treading on loose floor boards, or disturbing any inanimate object indoors or out. Nothing should be interfered with simply out of curiosity. In this business, continuous vigilance is the price of safety. What sort of booby traps has the enemy been using lately? Here is a roundup, from the Western and Southern fronts, of typical instances of recent German booby-trapping activity. The traps may be divided into four categories: those actuated by pull-igniters, those actuated by pressure, mines with antilifting devices, and miscellaneous contrivances.

1. Helmet.—A steel helmet lying on the ground covered a Sprenghorper 28 charge containing a Z.Z. 35 pull-igniter, which was connected by wire to the inside of the helmet. A second wire connected the charge to a fixed point. Lifting or kicking the helmet would have set off the trap. 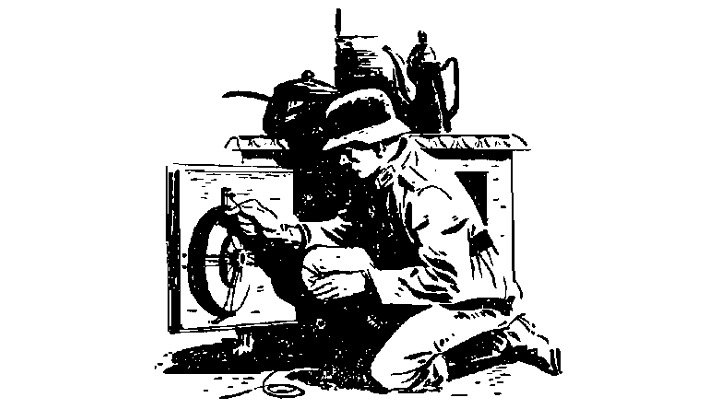 2. Mine in Oven.—A Tellennine’42, was found secured to the rear of an oven door in the kitchen of a private house. A Z.Z. 35 igniter had been inserted in the mine, with a wire connecting the igniter to the back of the oven. The door was slightly ajar; if it had been opened further, the mine would have exploded.

3. Corpses.—Egg grenades have been placed in the pockets of enemy dead. The actuating cords of the grenades are tied to strings, and the strings, in turn are tied to inconspicuous pickets driven into the ground nearby. When the corpse is moved, the grenade explodes.

3. Corpses.—Egg grenades have been placed in the pockets of enemy dead. The actuating cords of the grenades are tied to strings, and the strings, in turn are tied to inconspicuous pickets driven into the ground nearby. When the corpse is moved, the grenade explodes. 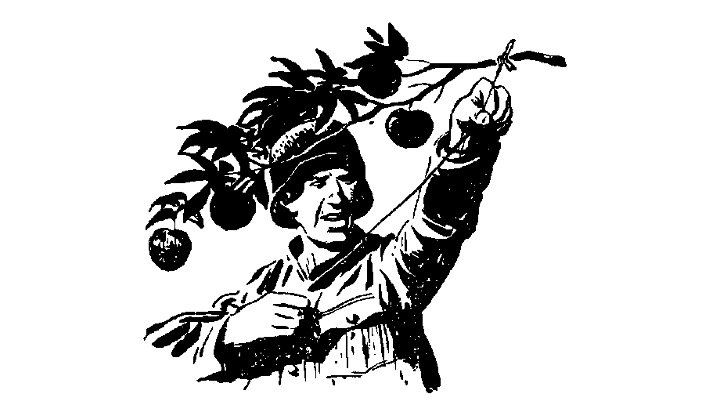 4. Fruit Trees.—Fruit trees have been fitted with wires leading to pull-igniters and charges of high explosive. When Allied soldiers reach for the lower branches or try to climb the tree, the charges are detonated. 5. Hedges.—The following instance of booby-trapping a hedge at a point where Allied soldiers would be likely to work their way through is typical of many others. Three picric blocks with Z.Z. 35 pull-igniters inserted in them were covered with stones, and were connected with wires to a nearby hedge. 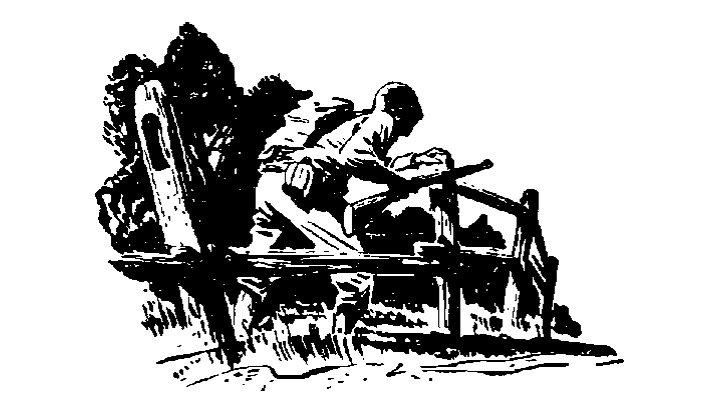 7. River Banks.—-The banks on either side of a river ford, usable only at certain times of the year, were booby-trapped in the following manner. Three 3-kilogram charges (Geballte Ladung) were laid side by side in each bank, with two Z.Z. 42 pull-igniters screwed vertically into the outer charges. Ten-foot length of trip wire led from the igniters and were secured to wooden stakes. Anyone attempting to use the banks would have been likely to trip the wires.

8. Roads.—The Germans have tied grenades to trees on each side of narrow roads, and have strung trip wires across the roads so that the fish-pole aerials or other parts of vehicles-will trip the wires.

9. Telephone Lines.—An enemy patrol came across an artillery observation-post line and cut it. In the immediate vicinity, they buried two S-mines, about 10 yards apart, so that the prongs of the igniters were about 1 inch above the ground level. Each loose end of the telephone wire was attached to a piece of fine cord about 12 inches long, and each cord led to a mine. The result Avas that, in the dark, a linesman picked up what he thought was merely a loose end of wire, and an S-mine exploded. (As the Intelligence Bulletin has previously reported, this ruse has also been employed by the Japanese.) The potential danger of such booby traps is of course considerably less in the daytime.

10. Rubbish Heaps.—The usual booby trap in a rubbish heap consists of an attention-catching object of some value as a souvenir, which is connected to a pull-igniter and a charge or antipersonnel mine by means of a wire or cord. 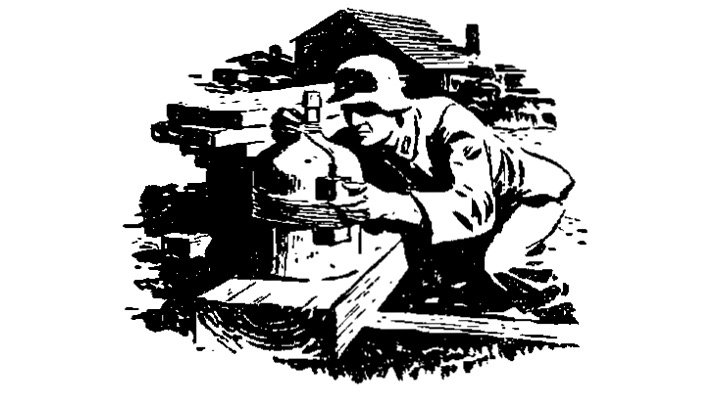 11. Molotov Cocktails as Traps.— Molotov cocktails may be used as booby traps when the Germans believe that particularly successful damage can be caused by fire. Just such a trap was found in a lumber yard. A small explosive charge of cordite with a detonator and primer had been attached to a large bottle of gasoline, which, in turn, had been lashed to a board. The device was to have been detonated by a pull-igniter, actuated by a trip wire. If the trap had worked, it ‘would have spread flaming gasoline over a fairly large area, probably inflicting severe burns on personnel and certainly making fire fighting extremely difficult.

1. Inverted Tellermines.—The Germans often inverted a Tellermine and inserted a D.Z. 35 push-igniter in the bottom hole to make the device antipersonnel in effect.
2. Mines under Planks.—A combination of S-mines and Tellermines may be buried in a road trail, and covered with a plank. Thus pressure caused either by a vehicle or by personnel would lead to detonation

1. Delay Igniters.—Thirty-second delay igniters have been reported fixed to mines, presumably directed against personnel who may attempt to lift such mines by using a cable.
2. Dummy Trip Wires.—Recently a new type of antilifting device has appeared—one which could be used with almost any type of mine, and particularly with wooden mines. Such a device, used in conjunction with an Italian four-igniter mine, employed a stake driven into the ground about 3 feet from the mine, which had been buried about Vfa feet below ground level. A dummy trip wire connected the top of the mine with the stake, while another wire led from a pull-igniter in the bottom of the mine to the bottom of the stake. If the latter wire had been disturbed, it of course would have produced detonation.
3. Devices on S-mines.—A wire may connect an S-mine with a standard 1-kilogram charge. One end of the wire is wound around the base of the mine’s S. Mi.Z. 35 igniter, while the other end is attached to a Z.Z. 35 pull-igniter screwed into the 1-kilogram charge. Also worth mentioning is an instance in which a wooden stake about 12 inches long was driven into the ground, with its top about 2 inches below the surface. A standard 200-gram charge (Sprengkorper 28) was wired to the stake, and a Z.Z. 35 pull-igniter screwed into the charge. An S-mine with a wire string attached, then was placed in a prepared hole, and the other end of the wire was connected to the Z.Z. 35 igniter. The igniter safety pin was withdrawn, and the S-mine itself was armed. As a result, detonation would be caused by anyone lifting the mine carelessly and rapidly, without having disconnected the wire sl-inp;. In addition, the S-mine itself remained a threat to unwary foot-sloggers.
4.Pressure-release Antilifting Device.—A mine may be laid on the pressure-lifting device E.Z. 44 (Entlastungzunder 44), which is subsequently armed and packed around with earth. Lifting the mine allows a rod, which has been kept down by the weight of the mine, to rite and release a striker in the E.Z. 44. This sets off the charge in the igniter and detonates the mine. 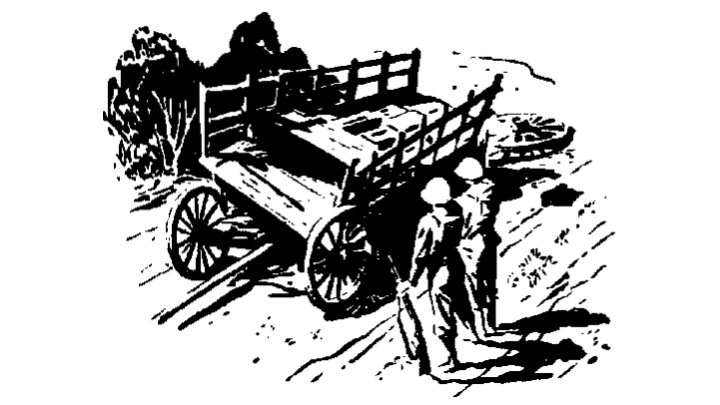 1. Abandoned Vehicles.—Abandoned vehicles, either wrecked or still intact, often are booby-trapped so that any movement of the wheels will result in an explosion. In the case of a motor vehicle, the booby-trap may be intended to function when the engine is started. The Germans sometimes use farm wagons in road blocks, and the possibility that such vehicles may have been booby-trapped should not be ignored. On a road in Holland, three abandoned farm wagons had been loaded with 15 cases of grenades and miscellaneous shells, and left blocking the road in such a manner as to give the impression that they had been abandoned in haste. Fortunately, a corporal inspected them carefully before ordering his detail to move them off the road. He found ten 200-gram charges on the bottom of one of the wagons, with a friction igniter (Zdschn. Anz. 29) attached by means of wire to a spoke of one of the wheels. Any movement of this wagon would have resulted in detonation.

2. Tellermine Crates. Tellermines in their original packing cases have been found fitted with igniters to prevent the mines from being withdrawn and used. 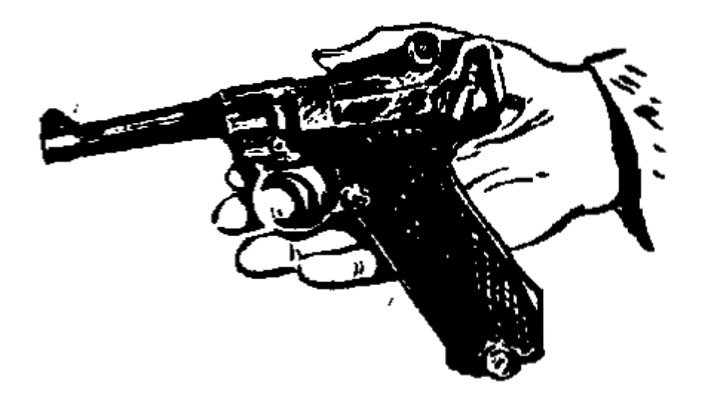 3. Charges Concealed in Weapons.— The Germans sometimes conceal a small charge in the mechanism of a rifle or Luger pistol that they plan to leave behind in a farly obvious place, to attract the attention of Allied soldiers. The charge, which is sufficiently powerful to injure a man severely, is detonated if the trigger of the weapon is pressed.

4. False Signs.—The Germans have been known to post signs in English indicating that road shoulders have been cleared of mines, when mines actually are present in these areas.