Geoff Futter with more information on the 79th Armoured and
THE CHURCHILL CROCODILE
in 1:76 scale 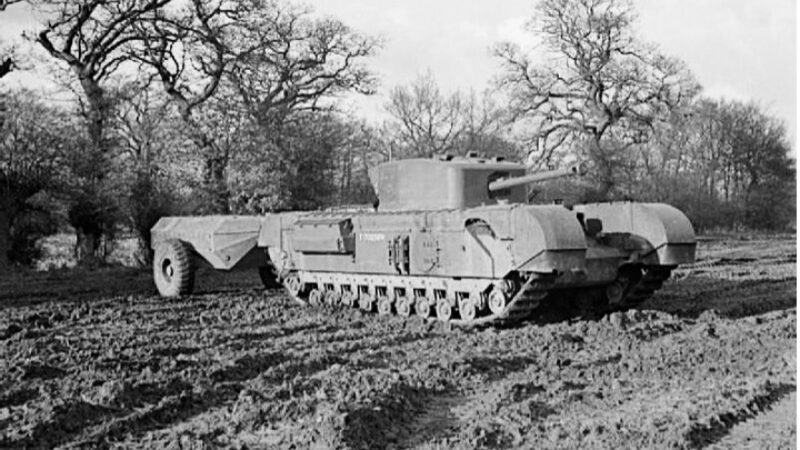 THE CHURCHILL CROCODILE was the only tank-mounted flame-thrower used operationally by the British Army during the Second World War and those which took part in the N.W. Europe campaign were oper­ated by units of the 79th Ar­moured Division along with most of the other specialised armoured vehicles of 21st Army Group.
The development history of British tank-mounted flame throwers is dealt with at length in the recently published AFV Weapons Profile No. 20 and readers of Military Modelling are referred to this booklet for fur­ther information. The standard Churchill Croco­dile consisted of a Churchill VII tank with a flame nozzle replac­ing the hull mounted MG and towing an armoured two-wheeled trailer which contained the flame fuel and bottle of Nitrogen for use in pressurising the fuel. The trailer was joined to the tank by a specially developed hinged link which allowed articulation when the Crocodile travelled over even the roughest terrain. From the trailer to the flame nozzle the pressurized fuel passed through a pipe fitted under the hull of the Churchill VII and this pipe was protected by an armoured shield. The fuel used was thickened so that it could be ejected from the nozzle towards the target in the form of a neat jet although, when used in a cross wind, the jet could be deflected away from its intended trajectory. The flame could be projected in short bursts or maintained continu­ously until all fuel (400 gallons) was consumed. As the nozzle was fitted in the hull gunners position it could, of course, only be used against head-on targets. The normal effective range of the flame-thrower was about 80 yards although this could be in­creased to about 100 yards when accuracy could be forfeited in favour of range. A special device was incorporated in the link be­tween the trailer and the tank which allowed the trailer to be jettisoned if it became damaged or when all the fuel had been consumed. A towbar which could be attached to the trailer was carried and this enabled jet­tisoned trailers to be collected by unit transport vehicles and taken away for repair or for re­filling with fuel and nitrogen. The Crocodile equipment (the trailer, nozzle, piping and con­trols) was manufactured in kit form to enable Churchill VII tanks to be converted to Church­ill Crocodiles in the field by R.E.M.E. personnel of user units and the majority of the Church­ill Crocodiles which served with the 79th Armoured Division were assembled in Europe by the 829th Armoured Troops Work­shop of the division. A total of approximately 800 sets were manufactured but not all of these were used by the division as many were utilised for training in the U.K. and for further de­velopment trials of the equip­ment, and about 250 were re­served for possible use in the war with Japan. To facilitate the fitting of Crocodile equipment to Churchill Vlls many of these tanks were provided with the necessary attachment points dur­ing manufacture. The 141st Regiment, Royal Armoured Corps (The Buffs) was the first Churchill Crocodile unit and this came under the command of the division shortly after D-Day. The 1st Fife and Forfar Yeomanry trained in the use of the equipment in the U.K. and joined the division at the begin­ning of October 1944 and the re­maining Crocodile unit of the division, the 7th Royal Tanks, came under command during February 1945. In September 1944 the 31st Armoured Brigade took over control of the Church­ill Crocodile units of the division. Extensive use was made of these flame-throwers throughout the N.W. Europe campaign when they proved to be invaluable as infantry support weapons. Their flame was used to saturate enemy strongpoints, MG posi­tions, defended houses, etc., with fire and not only was the Churchill Crocodile found to be an extremely lethal weapon but had a most demoralising effect on any enemy troops who thought they would encounter these flame-throwers. As the American Army did not possess any specialised ar­moured vehicles during the N.W. Europe campaign the equipment of the 79th Armoured Division was called upon to support them when necessary and because of the outstanding help given by the 141st Regiment R.A.C. to the American Army during their assault on Brest many members of this regiment were awarded American decorations. Suggestions for modelling the Churchill Crocodile to 1 /76 scale.
As with some of the modelling projects dealt with previously in this series the Airfix model of the Churchill VII can again be used as the basis of this model and this is probably the simplest conversion project so far in the series. All that is required is to con­struct the Churchill VII as des­cribed in the instructions in the Airfix kit, but omit the hull mounted MG, and then scratch­build the trailer as shown on the scale drawings and modelling sketches. The flame nozzle can be shaped from plastic scrap and then cemented into place on the Air­fix Churchill and plastic rod of suitable diameter can be fitted under the hull of the model to represent the fuel piping. When completed the model can be painted overall with Humbrol dark earth matt enamel or, for added interest, after this colour ha, been applied the model could be crudely over­painted with white matt enamel to represent the temporary finish applied to many 21st Army Group armoured vehicles durir:g the winter of 1944/45. 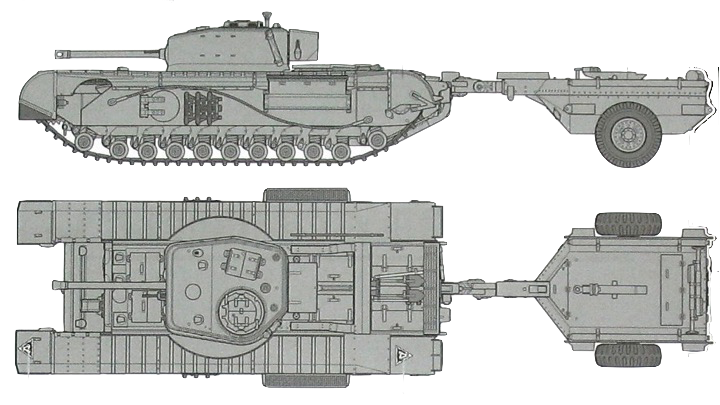