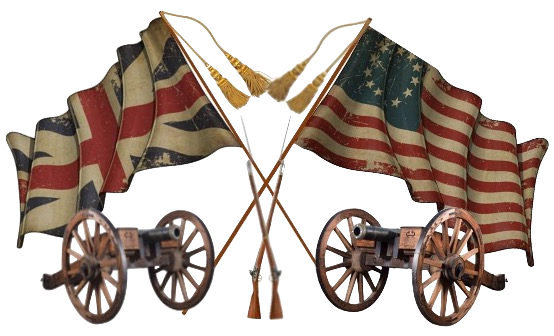 The Ferguson Breech Loading Rifle: Another prominent firearm of the War of Independence illustrated and described by D. A. Moss

From the beginning, the drawbacks to loading a weapon at one end and operating it from the other had presented a major problem and topic for experi­mentation among gunsmiths and inven­tors; the problem was how to attain an efficient method of loading at the breech and dispense with the time consuming process of muzzle loading?

Recognising the problem was one thing but finding the right answers would perplex gunsmiths for generations. Not until the second half of the 19th century with the advent of greater precision engineering and the invention of the self-igniting cartridge would really efficient breechloading firearms be poss­ible. However, the undaunted pioneer inventors continued their experiments all throughout the 17th, 18th and early 19th centuries, giving rise to a great variety of breech loading systems, some of which reached a reasonably high standard of performance considering the liabilities of loading with separate pow­der and ball.

One of the simplest and most effective of these was a threaded plug which screwed into the barrel at the breech, enabling the charge to be inserted into the aperture. The earliest known ex­ample of this type of breech plug was designed by Frieherr Von Springenstein of Munich in 1593; he manufactured a considerable number of weapons using this method. Then, just over a century later in 1704, Isaac de la Chaumette of France, improved on this system by designing a screw plug which passed virtually all the way through the weapon from the top of the barrel at the breech, its lower end being attached to the trigger guard which served as a handle with which the plug could be rotated to open or close the breech.

When lowered, powder and ball were dropped into the aperture and a few turns sealed the breech ready for action. In 1721 religious persecution com­pelled the Huguenot Chaumette, to flee to England where he set up once again in his trade as gunsmith. Business flourished and hee gained royal patronage also the immediate hatred of the English gunsmiths who unsuccessfully tried to break the patent on his breach loading system.

One of Chaumette’s compatriots, a fellow French protestant who rejoiced in the name of Bidet, produced an im­proved version of the plug with a quick thread, only one full turn being necessary to open or close the breech. To the greater fury of the indigenous gunmakers Isaac de la Chaumette improved his standing even further by presenting his majesty King George I with a beautifully decorated longarm incorporating the new breech plug.

Chaumette continued to run a success­ful business and manufactured a great number of these weapons. During the 1730s the great French military com­mander Marshal Maurice de Saxe advo­cated the Chaumette breech loading system for military use by the armies of France, but his advice fell on deaf ears. It wasn’t until just prior to the Ameri­can war of Independence that the breech loader was seriously considered as a military arm in Britain and the fact that it was considered at all was largely due to the efforts of one man.

Born :n 1744 the second son of James Ferguson, Laird of Pitfour, Aberdeen­shire, Patrick Ferguson was serving with the Scots Greys in Germany at the early age of fourteen. By the age of eighteen poor health forced him to retire from the military life, but six years later he was back in uniform serving with the 70th Foot in the West Indies, but in 1774 illness again compelled him to return home to Scotland. However, his time was not spent in idleness. Always a good marksman and student of ballistics he was working on a longarm for military use with an improved breech loading system based on Chaumette’s now ex­pired patent. He closely studied the Chaumette system and assessed its weaknesses.

The chief drawback being the fouling of the threads by the burnt powder. Ferguson set about designing a plug with several improvements. Firstly he gave a smooth surface to the area of the plug that came to rest at the base of the bore when the breech was fully closed. This smooth surface did not foul so much when the weapon was fired and thus it transmitted less carbon into the threads when the breech was opened.

Secondly a number of channels were cut along the length of the plug to collect any residue that did find its way into the threads. He also provided a small hollow behind the plug for any fouling that escaped the other precautions. The bottom of the barrel was greatly thickened so that the plug could be wound down below the bore for easier cleaning. The barrel was rifled and the weapon fitted with an adjustable rear sight.

Ferguson’s prototype breech loading rifle was years ahead· of its time and probably the finest military long arm of the day. Had it been adopted as the official British military firearm and mass produced it may well have altered the course of history both in America and elsewhere. By 1776 Ferguson had per­fected his rifle and was back in the King’s service. He succeeded in persuad­ing the master general of Ordnance, Lord Viscount Townsend, to witness a brief demonstration of the weapon. His Lordship was duly impressed and a further, more extensive trial was arranged for a committee from the board of ordnance and several high ranking mili­tary personnel. These worthies gathered at a suitable spot on the windswept Woolwich marshes in May 1776.

Among those present were Viscount Townshend, Lord Amherst, General Desagulier, General Harvey and several other officers. The weather was particu­larly inclement on the day, raining and gusting throughout the entire demon­stration, but Captain Ferguson’s rifle functioned perfectly under these adverse conditions. Shooting at a target two hundred yards distant he kept up a steady fire of between four and six shots a minute from the standing, kneeling and prone positions. Then proceeded to load, aim and fire whilst walking towards the target, virtually an impossibility when loading at the muzzle and using a ramrod.

This rate of fire would be good with a smooth-bore, but with a rifle it was incredible in those days. Then deliber­ately pouring water into the barrel and pan, thus wetting the charge so that it was impossible to fire, he demonstrated how quickly the wet powder could be removed, still leaving the ball in the breech. He then recharged the weapon with fresh powder and fired. This whole operation took less than half a minute. The assemblage were astounded at these results and one wonders why the

nation’s arsenals didn’t go over to full production of these weapons there and thenl As it was the ordnance cautiously authorized the manufacture of one hundred of the rifles under Captain Ferguson’s supervision. The order was completed by September 1776 and in October, Ferguson was put in command of a hand picked detachment of men and gave a demonstration of firepower before the royal family at Windsor.

A little less than a year after this event, Ferguson and his special rifle unit were called upon to give a practical demonstration in actual combat. In March 1777 they sailed for America and the war of Independence. Great hopes were entertained for the corps and they were attached to a Hessian force under General Knyphausen, but during their 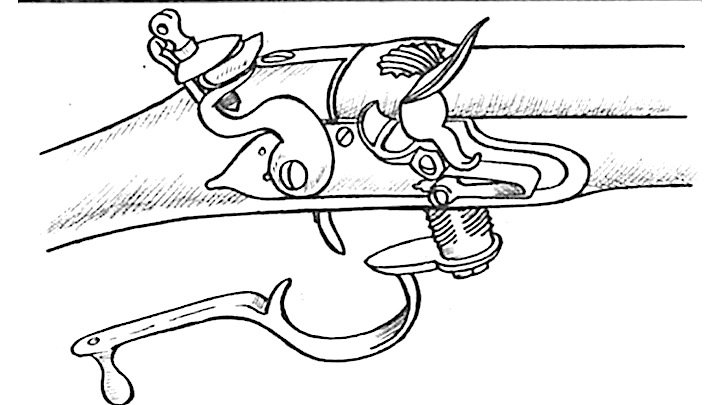 first engagement at the battle of Brandywine Hill on September 11 th, Ferguson was badly wounded in the right arm. The young Scot and his rifle unit had acquitted themselves well and contributed largely to British success in the battle. Whilst Ferguson, by now a major, was convalescing from his wounds, the British Commander. General Howe, for reasons best known to himself, decided to disband the rifle unit and the men were sent back to their various original regiments.

Its first battle had been its last. and as far as is known no other special unit equipped with the Ferguson rifle was ever raised again. What happened to 99 of the original 100 rifles is something of a mystery but a single specimen of this weapon in the Morristown National Park Museum, New Jersey U.S.A. is thought almost certainly to be the one surviving example from the original 100.

It has an overall length of 49 inches with a 34 inch long 8 groove rifled barrel of .68 calibre. It is possible that individual sharpshooters attached to units later under Ferguson’s command were issued with the rifles but there is no clear evidence of this. There were rifles of the Ferguson pattern made by various well known British gunsmiths, the most notable being Durs Egg, for volunteer regiments and sportsmen. also the East India Company commissioned a number to be made. but British troops were not to be issued with an official rifle until the introduction of Ezekiel 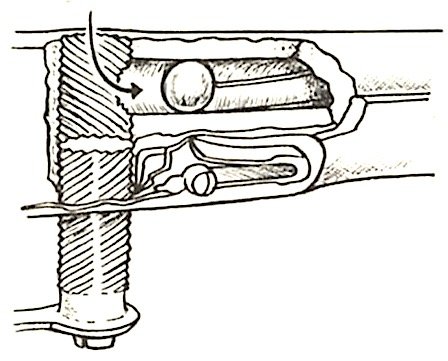 Cutaway diagram showing plug wound down and the method of loading powder into the breech.

Baker’s pattern in 1800, and that was a muzzle loader. Ferguson appears to have been a likeable officer and he met with a great deal of assistance and commendation from his superiors throughout his military career. His disability didn’t deter him and he continued serving in America. During the next few years he was very active doing reconnaissance work and leading daring raids against the enemy. He was made Inspector General of Militia in Georgia and the Carolinas, also holding either the official rank of Lieutenant Colonel or acting Lieutenant Colonel I have conflicting information on this point.

Finally, on the 7th October 1780, Ferguson and his men were surrounded by an American force numerically much superior, at Kings mountain in South Carolina. During the ensuing battle Ferguson, aged thirty six, was killed. With his death any remaining enthusiasm in the breech loading system for military use dwindled and it was to be over 85 years before another breech loading weapon, the 1865 Snider-Enfield, would be used by the British Army.