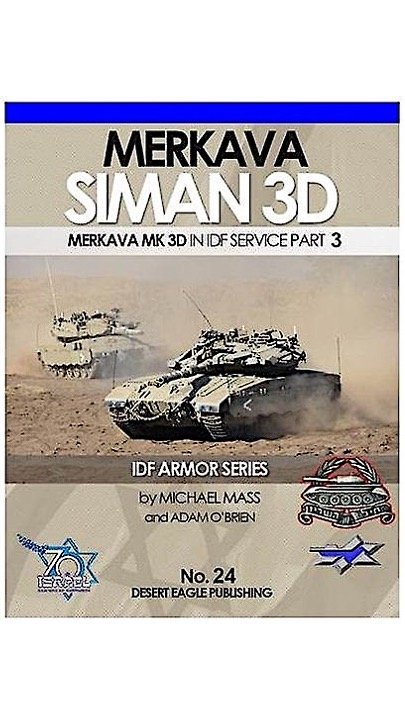 Israel’s Merkava is easily recognized by its front-engined layout, but it has evolved in all areas since it came into service in the late 1970s. This is the second 80-page softcover book in a series that began with a study of the MAGACH 6B GAL or M60A1 – reviewed in Mi/ Mod Vol.36 No.13 – is to the same high standard and general layout.

A short introduction covering the development of the Merkava describing the differences between the main types and variants with photos showing each. Main emphasis is the Mark 3 version and this is shown beginning with general all­ round views of tanks on exercise, some fitted with mine rollers and others towing bridges.

Then comes a series of clear large colour photos showing it in detail. It starts with the most important part of any AFY, the crew, with photos of them on and in the vehicle performing basic maintenance, reloading, track changing and loading onto a transporter. This offers good detail of various t uniforms as well as diorama inspiration. Then the tank takes centre stage with photos of all aspects. Coverage begins with the turret including close-ups of the main sights with various protective flaps closed and open, different types of turret top armour layouts, stowage racks, grenade launchers, external machine guns and mountings and hatches.

Then on to the hull, driver’s hatch and a view down into his position plus stowage and a look into the opened rear hatch as well as the headlights in raised position. Suspension is next, with views of different styles of road wheel as well as track,. sprockets, idlers and track adjuster.

Very useful are photos and drawings showing the armoured side skirt plates mounting. Several useful sets of line drawings are included, showing ammunition racks, grenade dischargers, machine gun mounting complete and in component form and suspension details amongst others After the detailed walk around and over we are taken on a brief, but comprehensive tour inside both turret and hull to see the various internal features and crew positions, then back outside to see mountings for various attachments including the instructor’s chair carried on top of the turret during training.

More photos show an engine being changed and the engine itself out of the tank. Markings get good coverage; not only are details of unit and tactical markings given in the general section, but there is a page describing tactical signs complete with dimensions and two more pages showing how they are applied in both official style and variations.

Rounding all this off is coverage of the Legend full kit, double page spreads with smaller views inset of a built unpainted model and similar views when completed followed by a step-by-step how-to of the painting process. I can but echo the comments in the review of the first book that are quoted on the back cover of this one – ‘as a one-book 50\.U”Ce on basic vehicle the book is top class. Adding the modelling feature ices the cake with all a modeller needs, apart that is from the model, materials, time and skill, but we cannot expect to have everything, can we?’

To quote from the publishers; ‘This book, like its critically-acclaimed predecessor, uses an extensive collection of never-seen­-before photographs that take readers into the Merkava 3 Baz for a close look at everything from tracks lo turret’.

I could hardly put it better myself and would recommend the book as a great source for modellers and students of armour.