To most people and airbrush is an airbrush. To a certain extent this can be true, especially when dealing with airbrushes designed to carry out a generic type of duty. I had used an Aztek for a long time and found this to be a very suitable airbrush for the type of modelling I was doing, however, it wasn’t until I decided to try an Iwata, that I realized airbrushes could range in quality – the same way a Lada compares to a Ferrari.

I began with the Iwata Revolution TR-1 and instantly found myself very comfortable with the trigger grip as it not only offered greater control and precision, but also increased comfort, particularly when spraying large surfaces requiring extended periods of action.

Boasting a .3mm aperture the TR-1 is capable of very fine line work, which greatly assists in the style of shading I use, however, the maximum operational width of spraying does mean that applying varnish and primer does require more care, pressure adjustment and, of course, time. Primarily working with enamels, which is the medium I can relate to the most with regards to qualities, and the TR-1 handles them with ease. Over several projects and using different paint to thinner ratios each time, I found the airbrush more than capable of handling all but the thickest of mixtures. I found that once I began to us.e less than 30% thinner 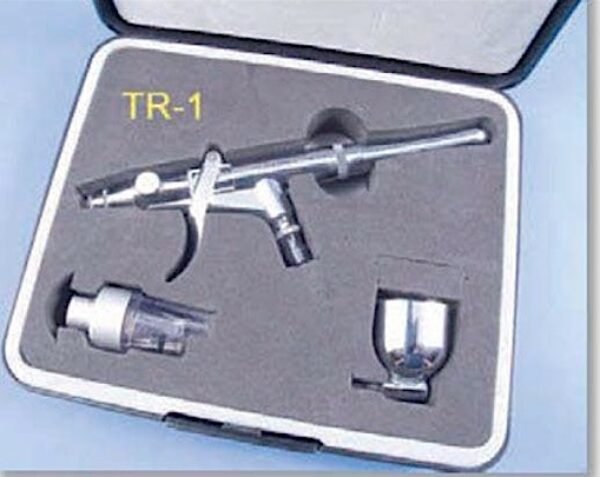 the TR-1 resisted the paint like it was spraying molasses, but this is not a limitation of the airbrush, as anything under thinner is simply too thick a paint mixture for any type of airbrushing. Lacquers obviously performed even better, as they are extremely thin to begin with, and in particular Aklad, which sprayed as it the 1R.-1 was designed specifically for it!

The precision of the .3nun nozzle allowed me to create some very neat effects with various shades of Alclad without filling the room with a cloud of noxious fumes, and by adjusting the pressure from the compressor meant that I could cover large areasquickei;andachieveclosein precision work by simply dropping the psi. I had a bit of an adventure with the first attempt with acrylic colours; however this was no fault of the robust airbrush, rather a result of my lack of practice with the medium. It had been years since I had sprayed with acrylics and of course I was not mixing the paint properly. Once I had found the right mixture the airbrush worked easily with the medium, although I still had problems with the occasional bit of clogging.

Anyone who regularly uses acrylics may not like to admit that this is an inherent problem with the medium, but then as they say the proof is in the pudding, and there has to be a reason why acrylic paint producers sell ‘retardants’. Cleaning and maintenance is another highlight of the airbrush to which I can testify. I have been using my TR-1 for months and have only had it apart once for a thorough cleaning. This was after an acrylic adventure, but I don’t want to start ‘flogging a dead horse’ about that.

Normal cleaning requirements are little more than a simple flush through with thinner between colours, and at the end of an airbrushing session I have found that a blast or two of Liquid Reamer (or Spray Away, both are the same sort of thing) using the blowback method, then dumping the contents of the cup out, followed with another blast and spray through are more than sufficient in the case of enamels and lacquers, with a slightly more thorough cleaning required for acrylics.

Of course, carefully sliding the needle out of the back, and running it through a swatch of Kitchen Towel soaked in Liquid reamer is also a good idea to keep it free from the build-up of pigments. Replacement parts for all Iwata airbrushes are readily available throughout the UK, 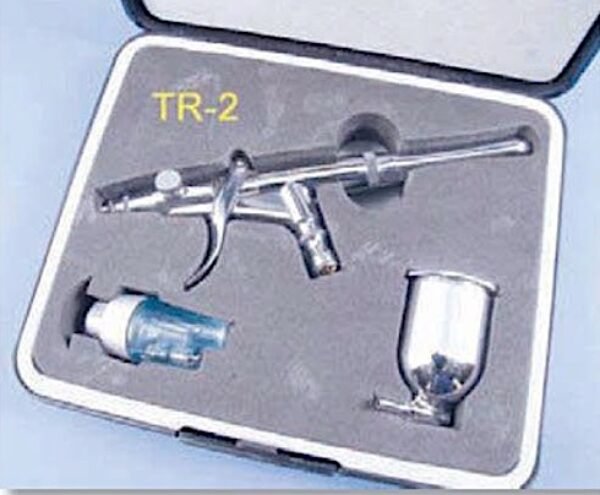 for all Iwata airbrushes are readily available throughout the UK, or through whatever national distributor you have in your respective country, and thanks to the excellent service offered by the UK distributor The Airbrush Company, my personal experience has shown that the Iwata is an extremely logical choice for an airbrush. Again, I know from personal experience that service and parts when it comes to some other types of airbrush can be difficult.

As a partner to the TR-1, the TR-2is designed as a more ‘general duty’ type of airbrush, with a .5mm nozzle and needle, which allows for wider coverage than its .3mm counterpart. I did find that l was able to achieve fine lines with the TR-2 as well, and it did in fact spray primer and varnish on a much wider area with considerably more ease than the TR-1. Obviously its characteristics when working with the various mediums I’ve mentioned were identical to the TR-1, although I did notice that it was a lot less prone to clogging when working with acrylics. I imagine the TR-2 is going to be the best choice for those who work in acrylic paint. I realise it is very easy and all well and good for someone to say that the two airbrushes compliment each other very we and if you can afford to operate two airbrushes of this quality side by side, then I highly recommend doing so, although there is an alternative that will allow you to utilise the best of both without laying out for two separate airbrushes.

By simply applying a checklist of the qualities needed in an airbrush to both of these excellent products, they both score very highly and thus come very strongly recommended by me. The spraying characteristics are perfect, the durability sound, maintenance simple, and service and support are second to none. If you are looking for an airbrush that offers precision work, comfortable use, and a long and useful life (in the UK all Iwata airbrushes come with a standard 10-year warranty against parts defects) then you needn’t look any further, The Airbrush Company offer airbrush and compressor kits from £229.99. I have used both of these airbrushes over an extended period of time and painted no less than a dozen models with them, and have found them to be faultless.
Jay Laverty
Price in text
The Airbrush Company ltd., Marlborough Road, Lancing Business Park, Lancing, West Sussex BN15 8UF. Tel:08700 660 445 sales@airbrushes.com www.Airbrushes.com

Thinning the Cost of Painting.